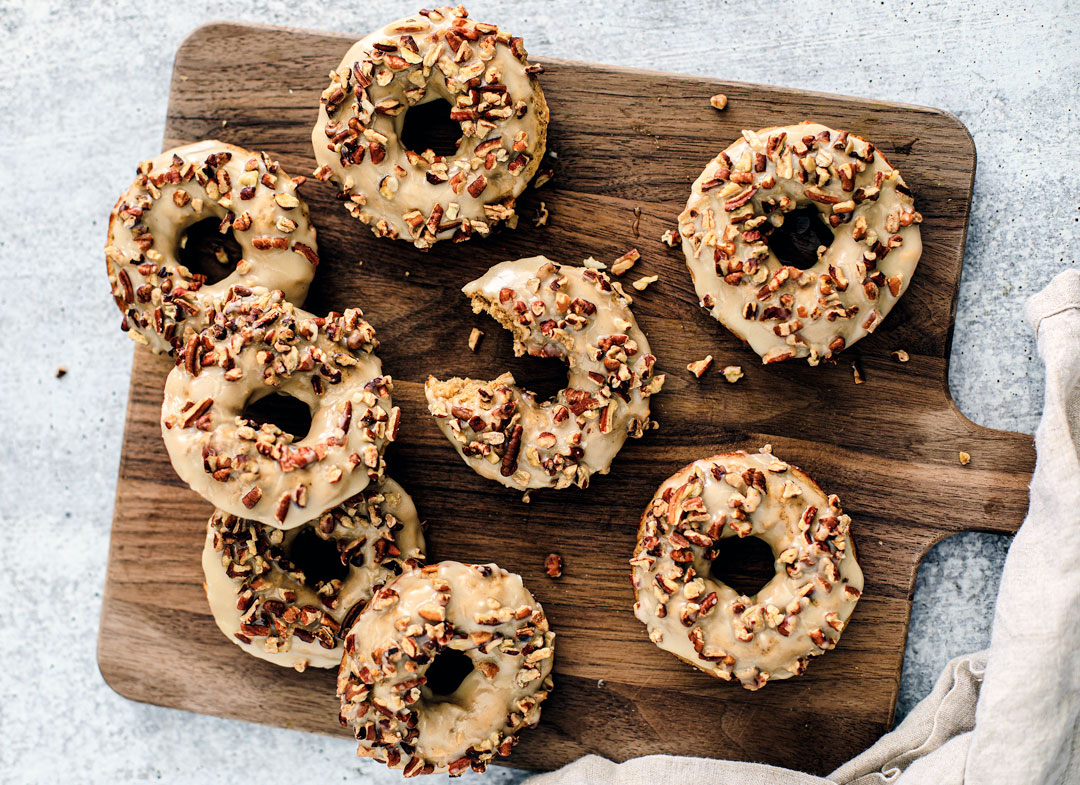 This maple baked donut recipe gives you donuts smothered in a lip-smacking maple glaze, then topped with toasted pecans. The perfect pairing for your morning coffee.

This donut recipe is bittersweet. In theory, not in flavor. Since I’m always touting apple cider over pumpkin spice, my original hope was to whip up some apple cider donuts with a lip-smacking apple cider glaze. But no matter how I whipped it, mixed it, or reduced it, I couldn’t get a strong cider flavor to come through; I tossed three different glaze and icing attempts into the trash! It was a fun day ;) But I can’t be too disappointed. Because as a result, we’ve got this maple baked donut recipe to enjoy. And they’re sprinkled with toasted pecans. WE WIN.

My good friend Anna, being the baking pro that she is, was the first person to introduce me to baked donuts. I went bonkers over them. I made my very first batch last winter (eggnog donuts, anyone?) and was pretty tickled with the result.

Baking donuts is a cinch, but the batter can seem… untrustworthy. It’s always recommended to slop your batter into a large plastic freezer bag and pipe it into the donut pan. And it’s upon piping it into the pan that I find the texture to be a bit ugly. I’m never convinced that these tacky and gluey rings are going to transform into beautiful fluffy donuts! But then they do. So, don’t feel discouraged when you’re piping the batter into your donut pan and it seems fickle; it comes together in the end. Then, you celebrate with donuts and coffee. Or tea. Or hot cider. Whatever you fancy.

And then there’s the iced glaze. It’s just too good. Legit maple syrup from Quebec, of course. I reduced the maple syrup, whisked in some butter, then slowly whisked in some powdered sugar. This resulted in a creamy drizzle-friendly but totally dunk-worthy maple glaze.

The thought of sprinkling toasted pecans over these gems to finish them off sort of speaks for itself. I mean, why wouldn’t we do that. But if there are nut allergies, or you simply don’t like pecans, skip that part. You’ll still love them :)

Away from the table…

I need to tell you about Bee Seasonal Honey. Because they’re honey is ~everything! The founders are passionate about sustainably harvested honey, socially engaged beekeepers, and the range of characteristics varying honeys from different places can offer. This shows in their final product. I’ve been using their honey in recipes, both savory and sweet, and I had to put them on your radar.

Currently wide-eyed over this Instagram account. I don’t even know how this fellow creates such majestic bakes.

As far as reads go, I’m bouncing back and forth between Becoming by Michelle Obama and The Last Time I Lied by Riley Sager. Multitasking! Have you read either of these books? What are you reading right now?

I hope everyone is having a fantastic week :) My fingers are crossed for some gloomy weather this weekend. I want to curl up in jogging pants and be cozy. Without the sun peeking through the blinds letting me know I’m being a hermit ;)

To toast the pecans, simple place the chopped pecans in a dry pan and toast them on the stove over medium-high heat. Once the pecans are aromatic and browning, they're done. Keep a close eye on them and shake the pan often to avoid burning them.

I'm Dana—sweet, salty, and enthusiastic about everything. More here…