THIS RECIPE IS SPONSORED BY ARBOR TEAS | OPINIONS ARE MY OWN

Much like the Okonomiyaki I made back in December, I’d never tried Ochazuke until I whipped it up for this series. If this series has taught me anything, it’s that if you find yourself intrigued by a dish you’ve never had before, you can still attempt it at home and totally nail it. So okay, you lack the satisfaction of a proper comparison, but when you dig in and take that first bite you will definitely know whether you’ve done the dish justice or not. Just follow a solid recipe from a trustworthy source! *ahem*…

Ochazuke (ocha meaning tea and zuke meaning submerged) is like nothing I’ve ever had before, and I mean that in the best way. It’s a fuss-free lazy day fave amongst the Japanese (and now me) that is typically served in an overly large bowl, because let’s face it: the bigger with some foods, the better. This is why bowl meals are trending, folks. But a large mug, cereal bowl or soup bowl will work just fine. The idea is to be able to curl up and get comfy with this bad boy, so if you have a vessel that allows you to do that, all is right in the world of Ochazuke.

Two major things drew my attention to this recipe while researching dishes:

There *is* another variation of Ochazuke that replaces green tea with dashi stock, but between the Spicy Shoyu Ramen and the Okonomiyaki in this series, we’ve seen dashi aplenty. I wanted to honor the simplicity of this dish and, even more so, give this whole green tea as a broth thing a whirl.

I’m thrilled to report that it. was. ah-mazing. 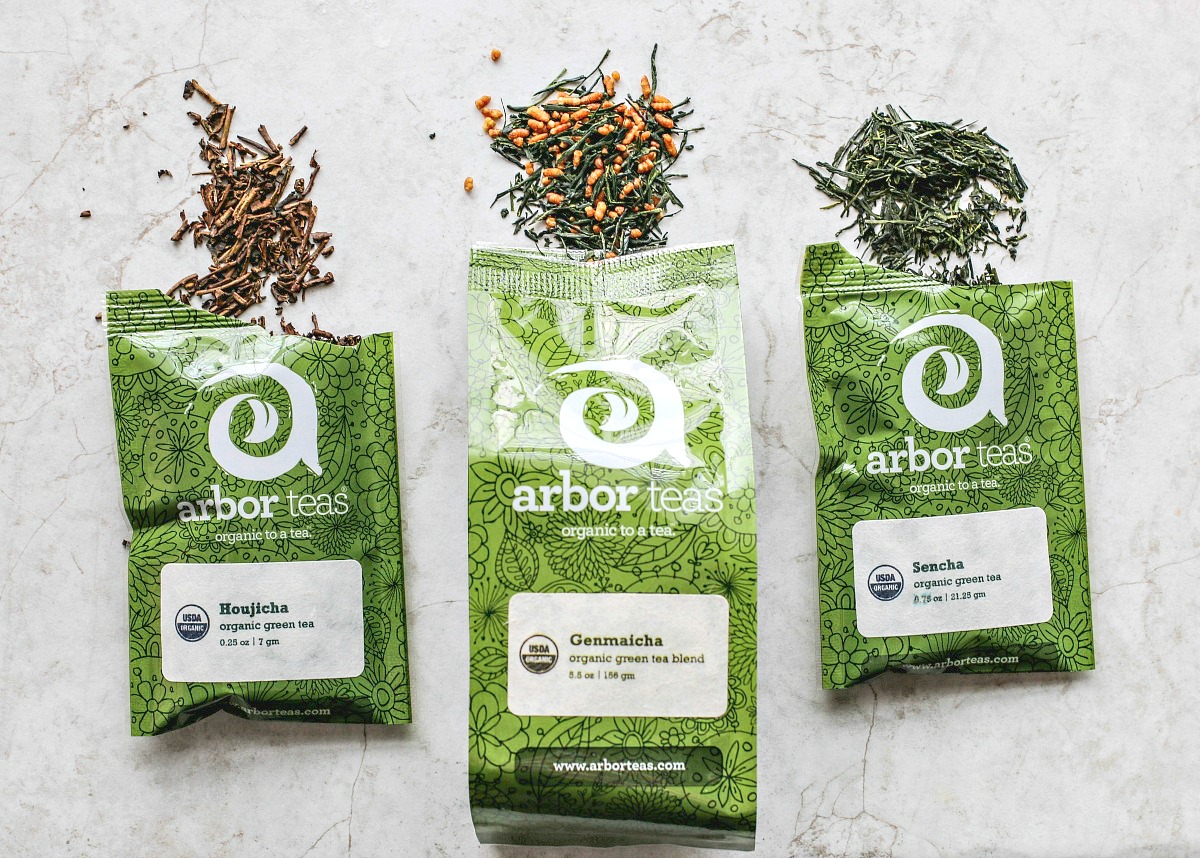 Since green tea is a prominent ingredient in this recipe, I wanted a high-quality blend that would provide a natural and earthy flavor. Nothing overly potent, but certainly not something that would leave the dish watered down. Arbor Teas selection of tea in general is impressive, and their greens are absolutely perfect for Ochazuke. Needless to say, when Arbor Teas and I decided to partner up for this post, I was elated; I get to shed light on an ingredient that is not only tasty, but sustainable and fair-trade. High five! It’s also worth mentioning that Arbor Teas’ packaging is backyard compostable. So, you know, if you respect the earth you walk on, double high five.

When it comes to selecting a type of green tea, Ochazuke gives the warmest welcome to Houjicha, Genmaicha and Sencha. After spending a rainy afternoon blissfully sipping these teas to test them out (blog life is haaaaaard), I decided that Genmaicha was the one. 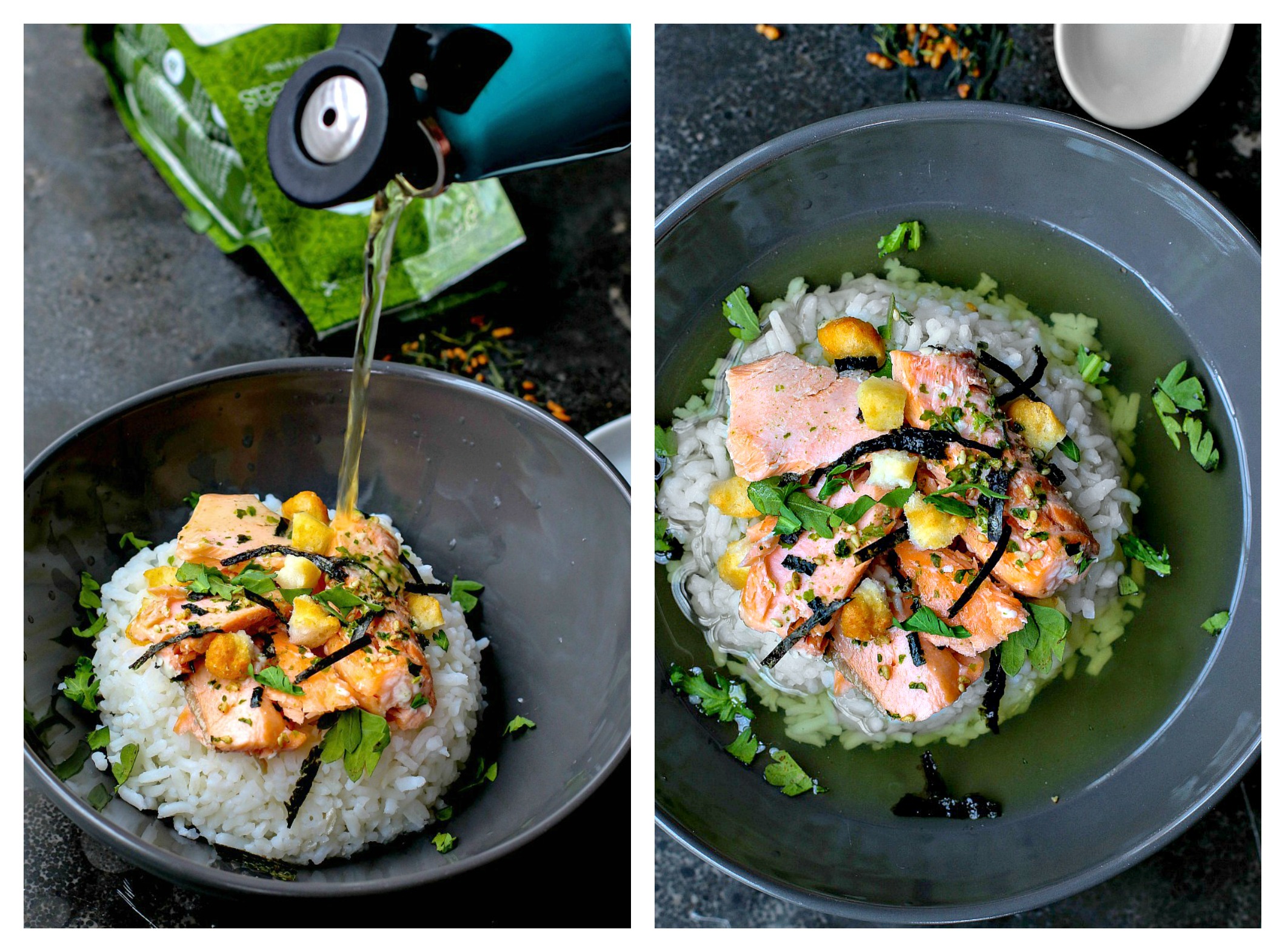 Some may think that green tea is green tea no matter how you blend it or brew it — but any tea snob who has consumed enough quality teas (Quali-teas? #Qualiteas — can we get that trending?) will tell you otherwise. Even I myself, a devoted coffee drinker, could notice subtle differences between the three blends. That, my friends, is good tea.

So, why Genmaicha? Arbor Teas’ blend is made up of organic green tea and organic toasted brown rice giving it a toasty flavor that is light-bodied and carries minimal bitterness; broth-y perfection, y’all!

And will you just look at those swoon-worthy tea leaves and toasted rice pellets? 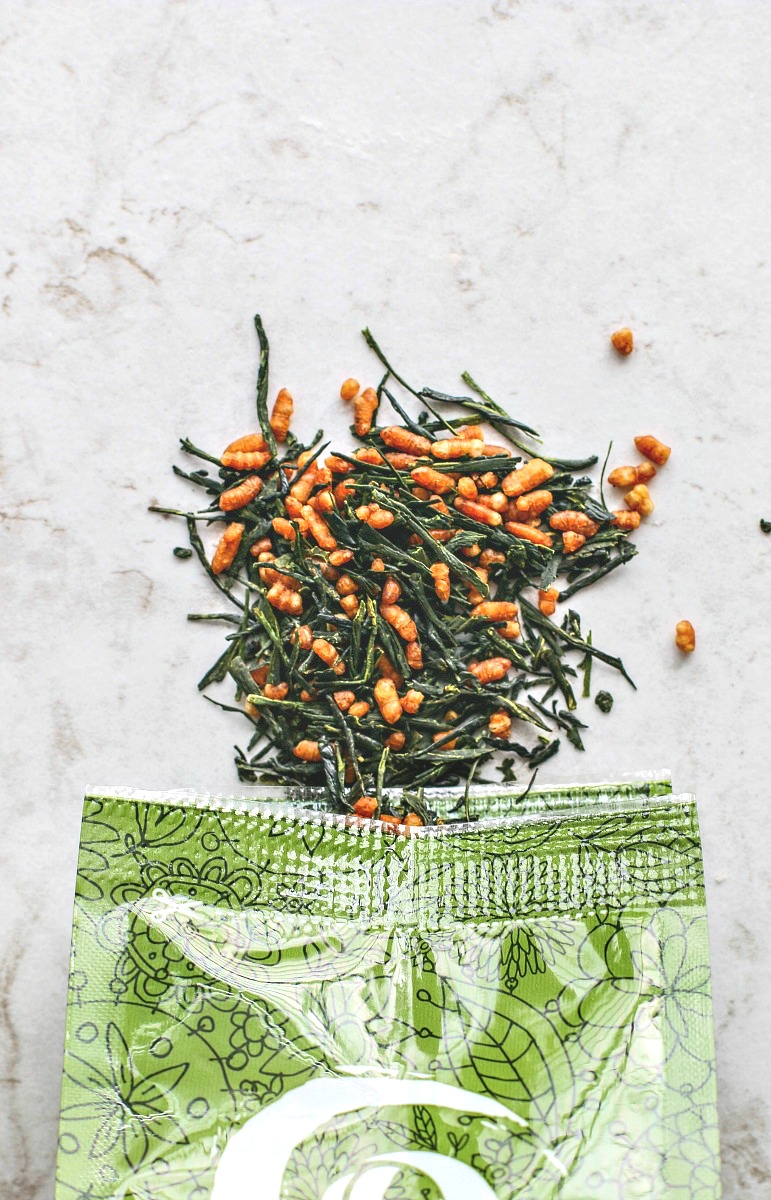 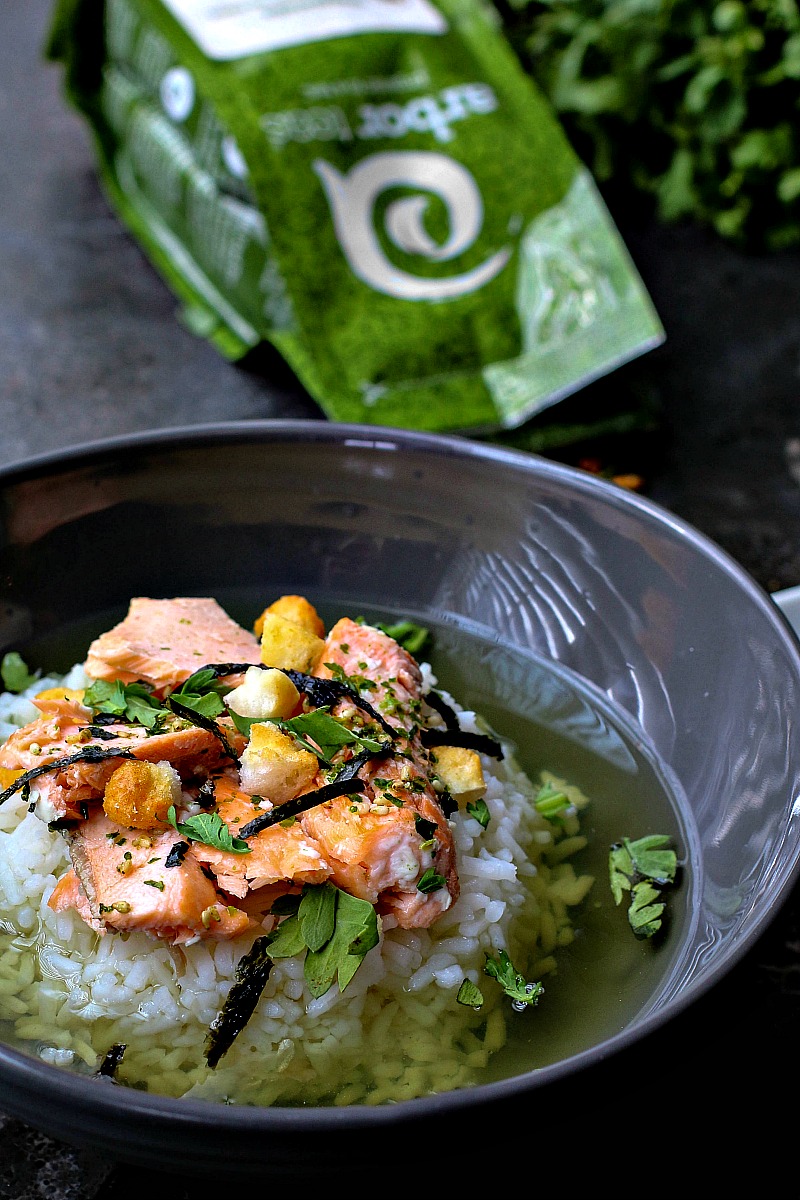 Though the concept of this dish may seem far-off from the bowl of feelgood soup that you’re used to, the similarities are undeniable. The heartiness from the rice and salmon are reminiscent of your standard chicken and rice soup; the hot tea, which you can add a tablespoon of soy sauce to for extra flavor, is as belly-warming as any other soup broth out there. And, if you dig salty crackers in your soup, we’ve got that covered with Japanese rice crackers.

This dish is a total win, and though you won’t find it on many restaurant menus outside of Japan, you can easily find the ingredients at your local Asian market to make it in the comfort of your own kitchen.

(And you totally should.) 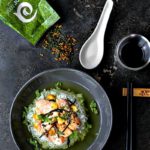 HAVE YOU MADE THIS RECIPE? SNAP A PIC AND TAG ME ON INSTA! @KILLING__THYME /#KILLINGTHYME 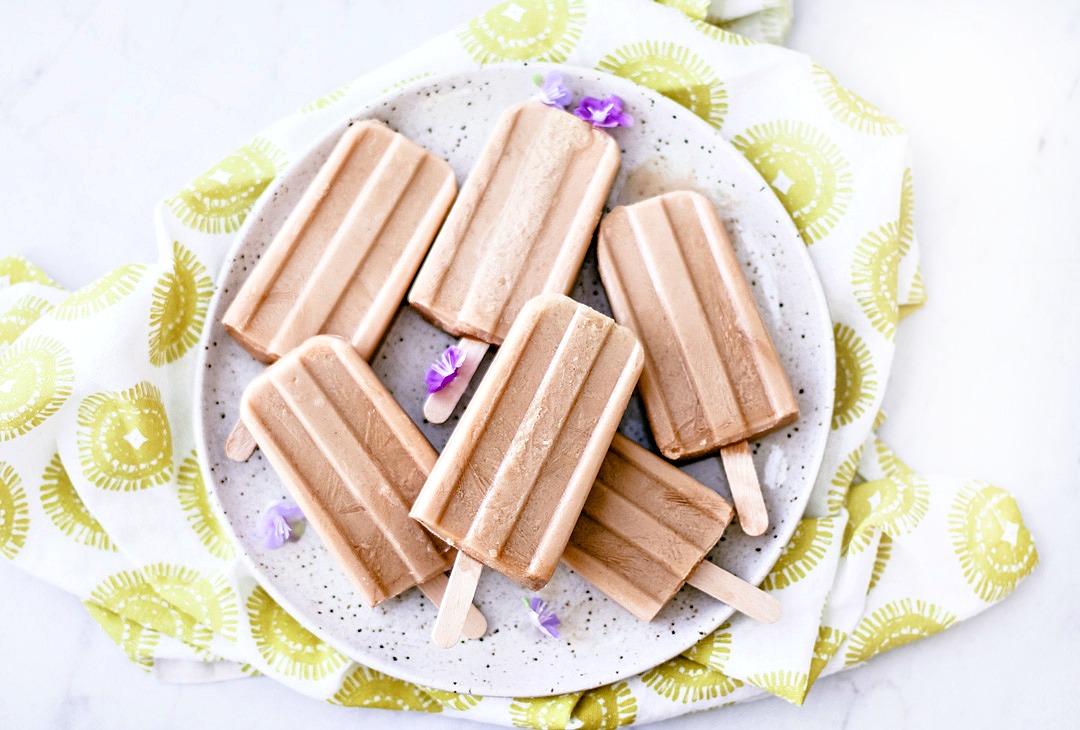 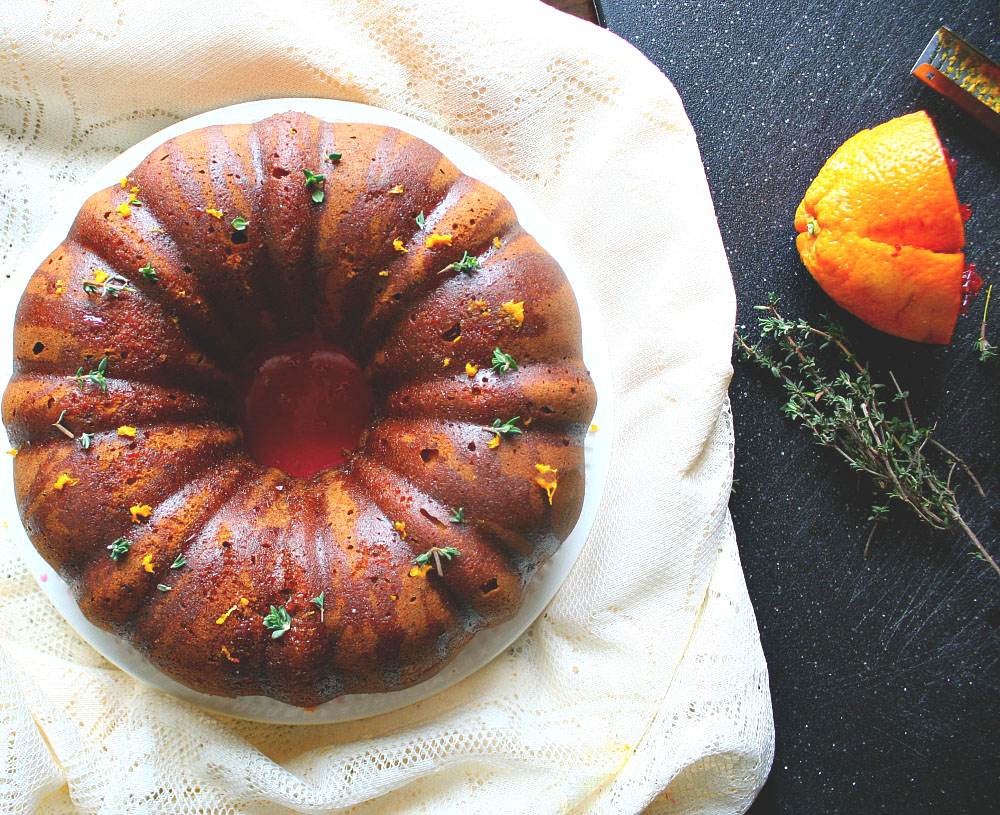