When I first started doing my homework for this series, okonomiyaki was the first dish that jumped out at me. With all of it’s golden crisp goodness and striking trimmings, how could it not? I’m a sucker for anything that is crunchy, savory and bursting with umami, and without ever having tried this gem before I could already tell how it would taste; flippin’ delicious. So, undeterred by my lack of familiarity with it, okonomiyaki was the first thing I penned on my list for the Japanese segment of this series. After all, this series is about becoming familiar with East + Southeast Asian food beyond the Americanized menu and encouraging others (yeah, you!) to tap deeper into these culture’s cuisines. 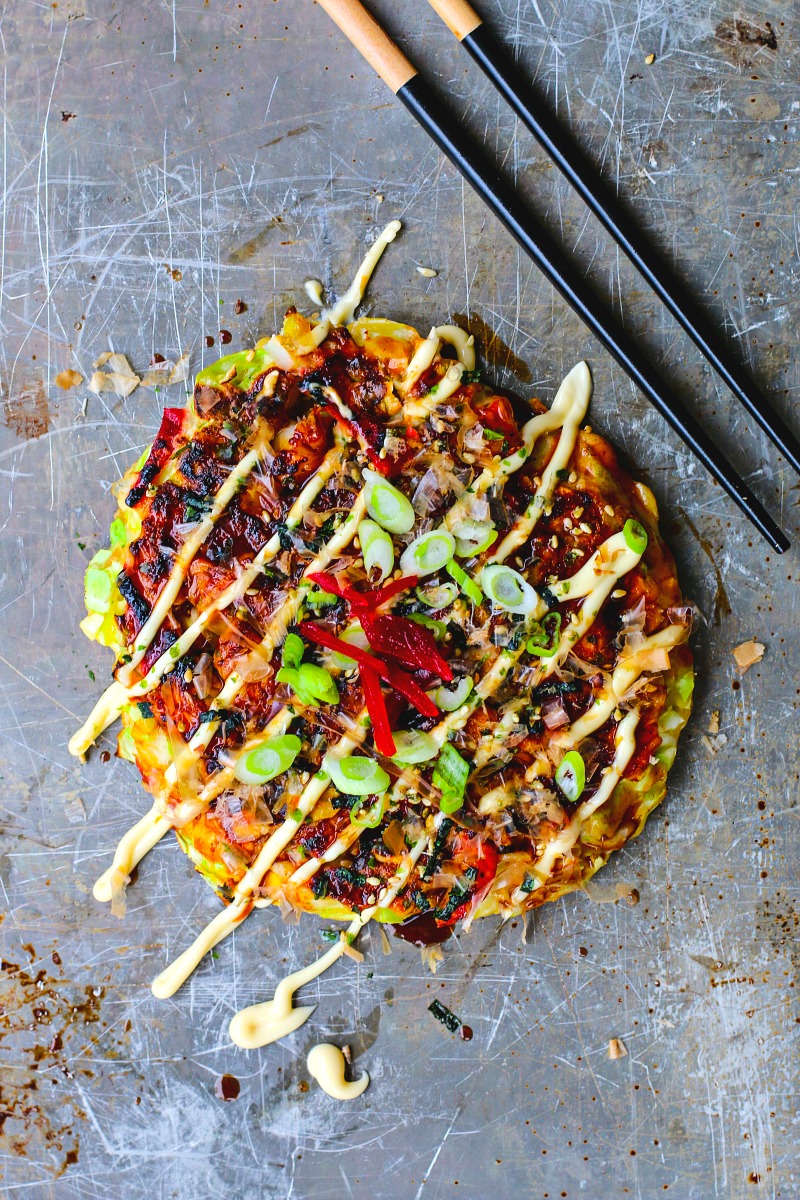 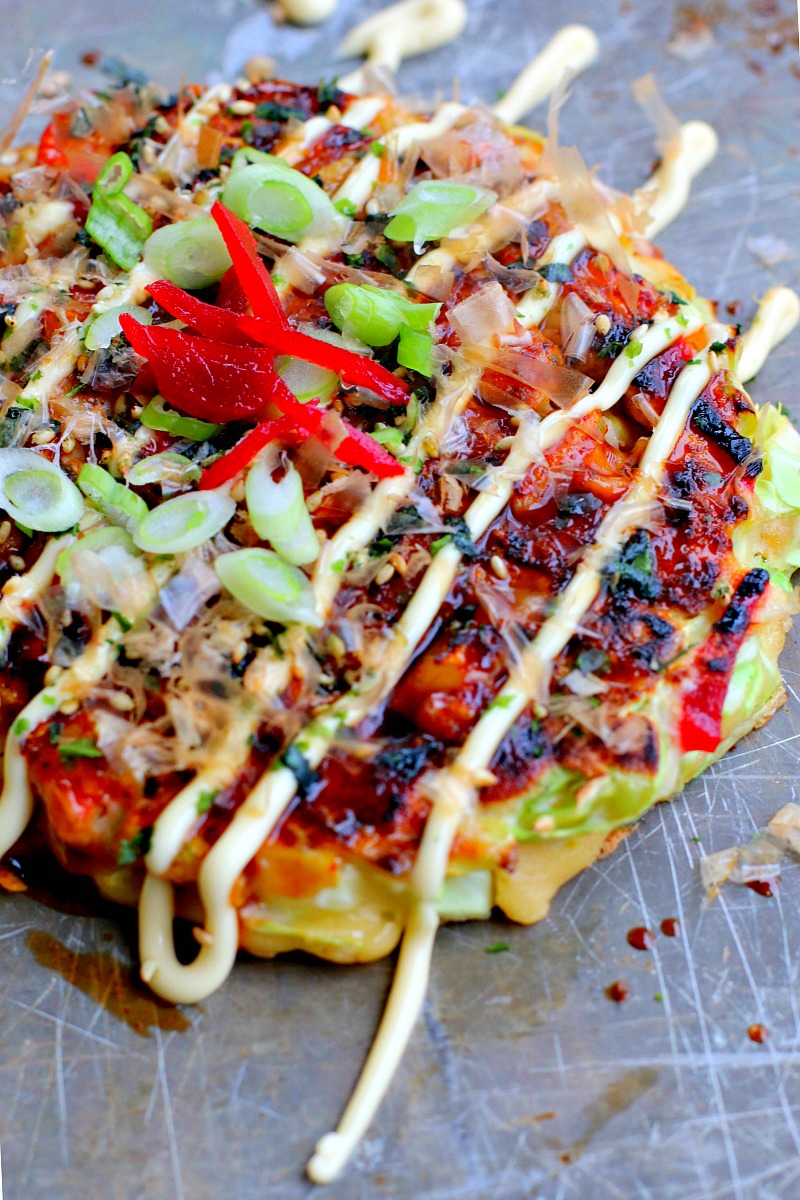 The name okonomiyaki translates to “grilled how you like”. Some restaurants that specialize in okonomiyaki boast a diner-style counter where the chef prepares the dish in front of the patrons; other restaurants pride themselves in being a grill-it-yourself establishment where the server gives patrons the chance to be their own chef with a bowl of uncooked ingredients + hotplates on their tables — similar to Korean BBQ or Shabu-Shabu restaurants.

There are several versions of this dish, including modan-yaki (served with a layer of fried noodles) and negiyaki (a thinner pancake that incorporates a lot more scallions), but okonomiyaki is the most predominant throughout the majority of Japan. Most of the ingredients are common and include eggs, flour, cabbage and dashi, but there are a few shining ingredients that might be new to you. 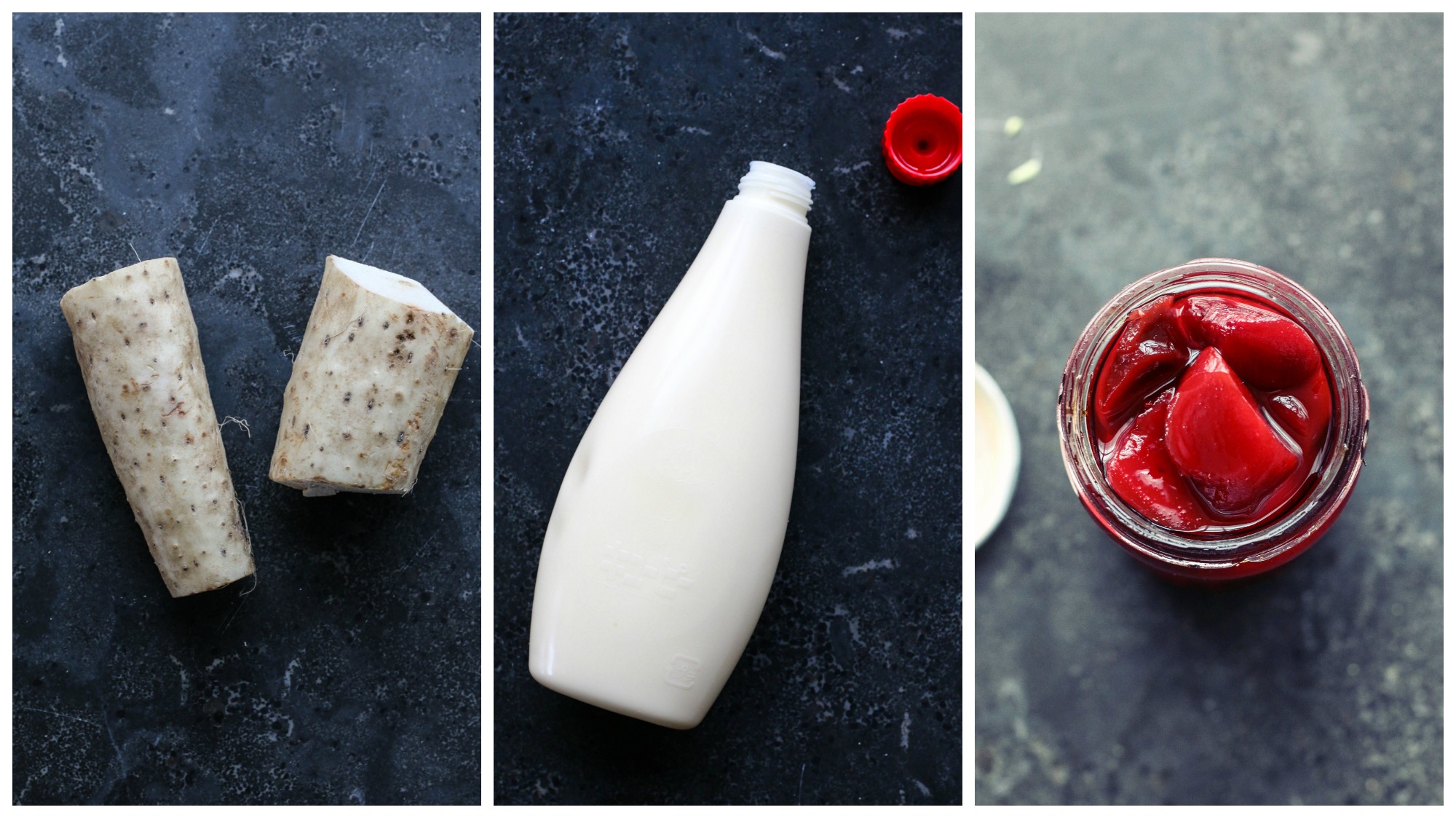 None of these are essential ingredients, but they’re highly recommended for best results. Your tastebuds will thank you.

The naigaimo is a Chinese yam. Despite it being an optional ingredient, it adds a fluffiness to your pancake that you *don’t* want to miss out on. Most large Asian markets carry it, but if you can’t find it, you can still cook up a stellar okonomiyaki. In fact, I came across several okonomiyaki recipes throughout my research that didn’t include it.

Something worth mentioning is the alarming texture of this yam. (Yes, alarming.) When you first cut into it, it seems like no big deal; it’s like cutting into an apple. But once you start to peel it and expose the inner flesh, it gets slimy and when you grate it… well, you’ll see. Think of me when you do it, and allow your mind to go into the deepest of gutters. *casually sips tea*

Japanese mayo is similar to regular ol’ American mayo, except not. (Whut.) Kewpie, which is Japan’s Hellman’s, has a smoother texture and a tangier flavor than it’s American kin. This is due to the fact that Kewpie increases the egg count, decreases the egg whites, uses vegetable oil, swaps the usual white vinegar for rice vinegar, and adds MSG. Yes, that last ingredient is often disputed, but if you want the true flavor of Japanese mayo, it’s necessary — plain and simple. If you’re the type to hiss at the idea of MSG, don’t fret; stick to what you’re comfortable with.

Onto the ruby-hued pickled red ginger. It’s a thing of beauty, and this is coming from someone who doesn’t fancy the ethereal pink slices served next to sushi. It must be the plum vinegar. Either way, I was originally going to skip out on it, but I’m so glad I didn’t. It adds an incredible zip to the pancake that I can’t picture it without. 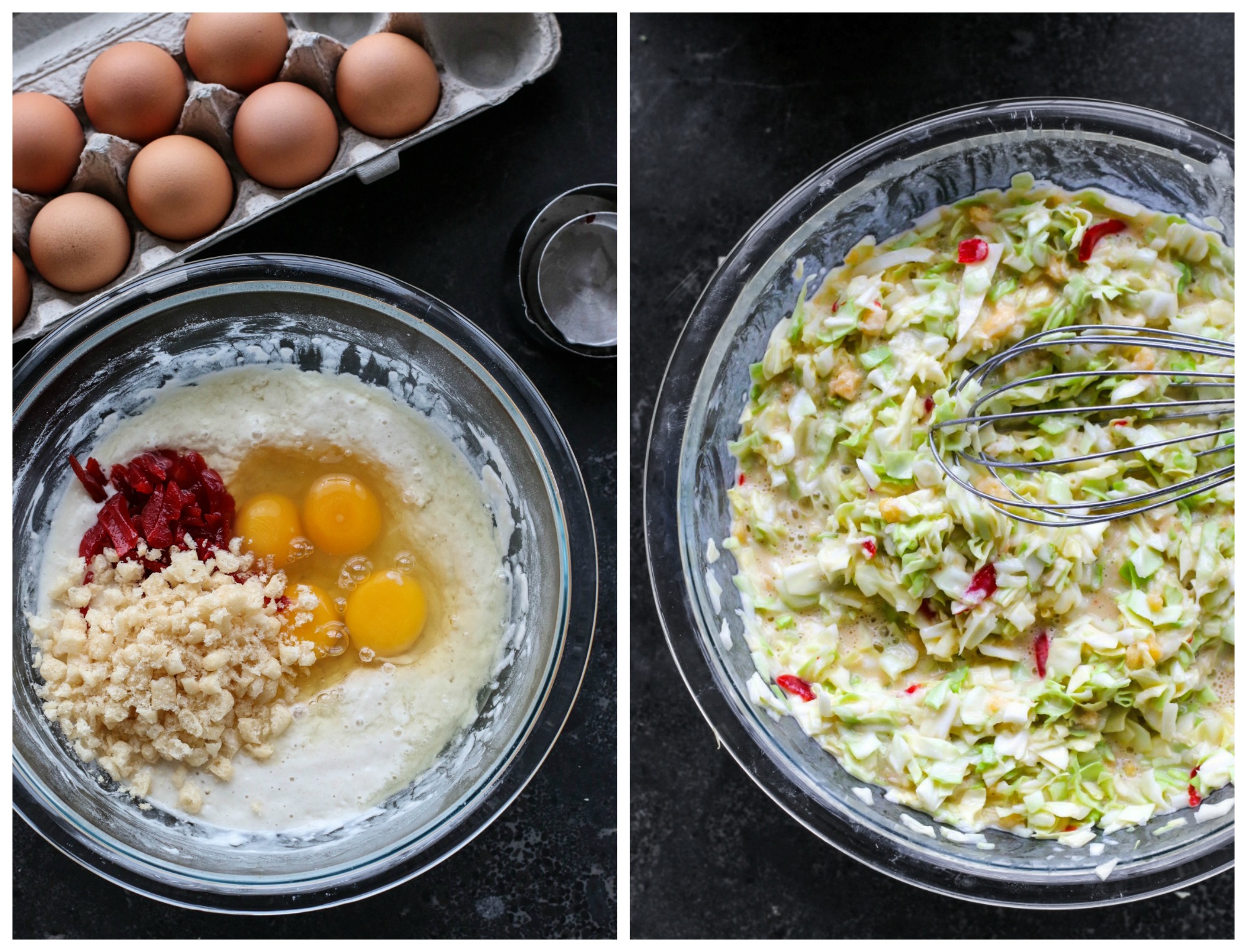 Though this dish intimidated me at first, I can say with confidence that it was a breeze to put together and it’s super simple to cook. Due to the girth of each pancake I assumed they’d be difficult to flip without breaking, but everything worked out swimmingly. 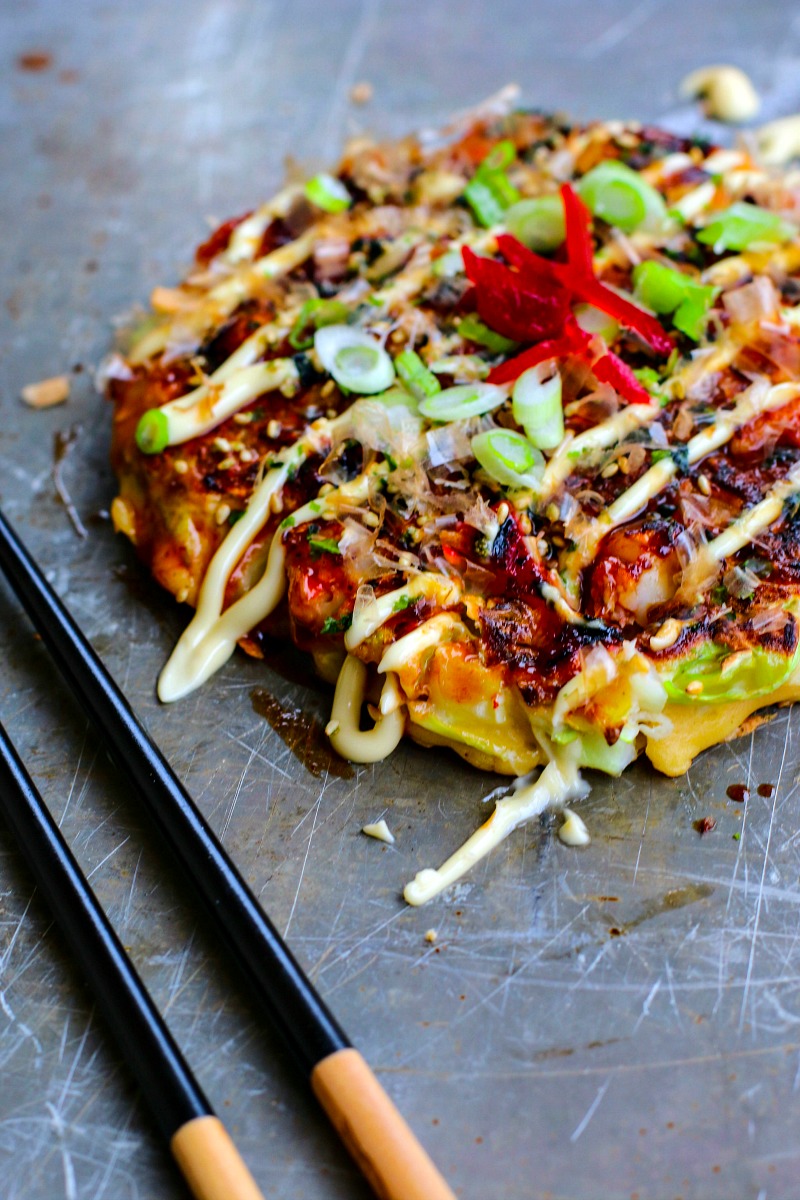 Of course, the easiest part was devouring the damn thing. 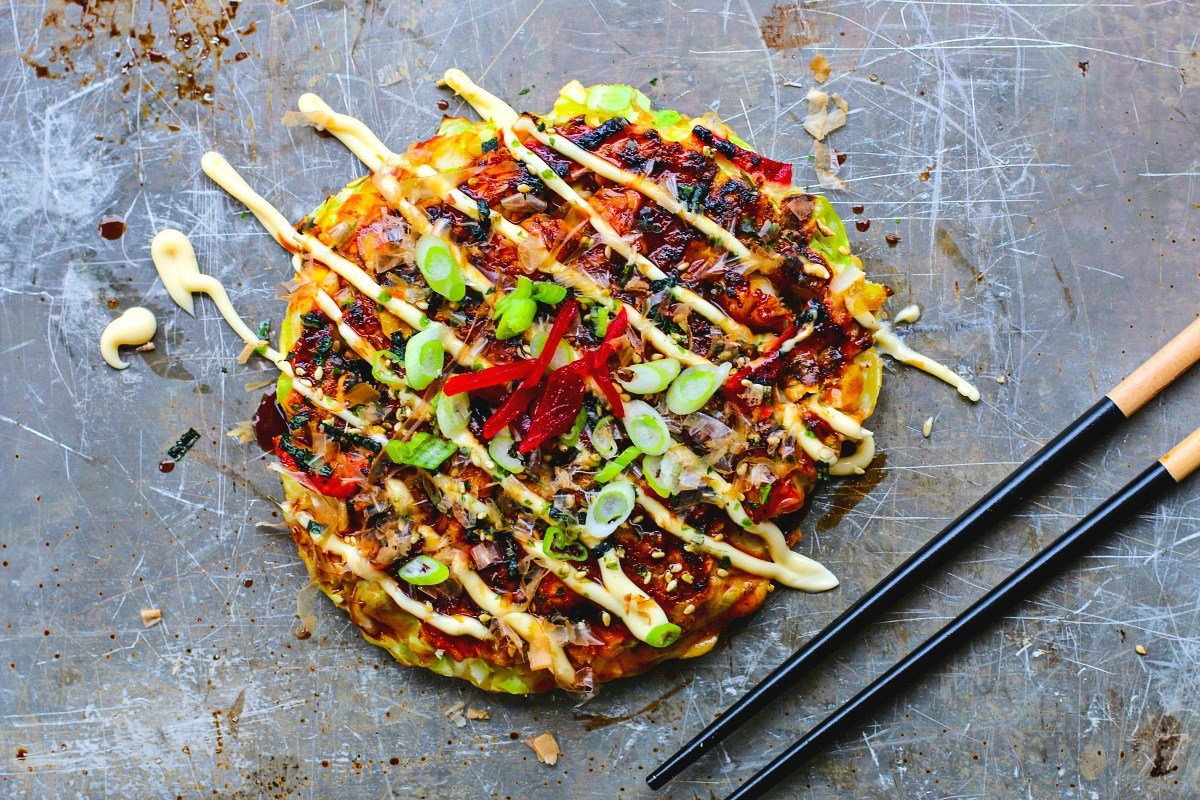 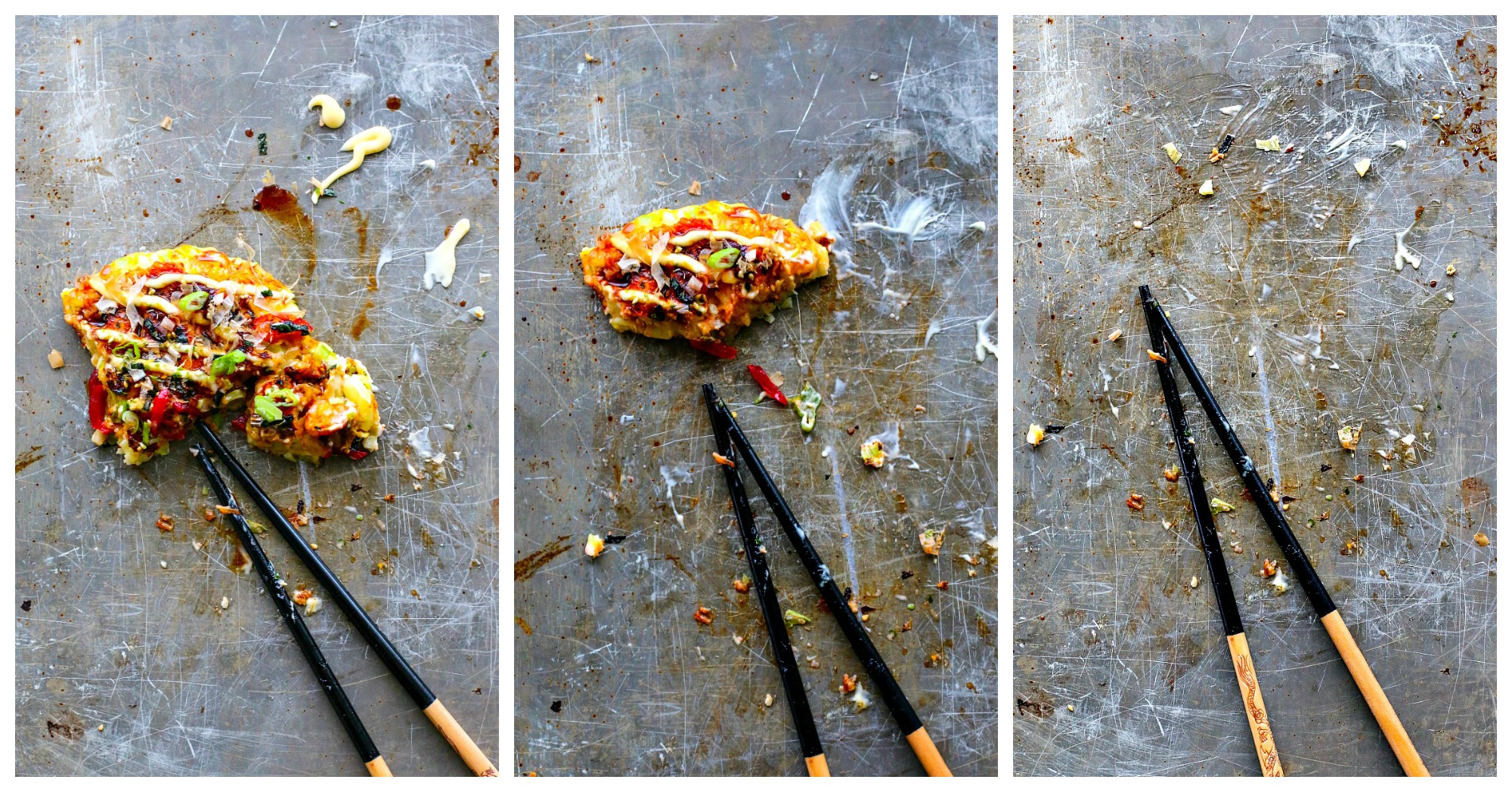 Yield: 4 servings
Okonomiyaki is a glorious savory Japanese pancake that will blow your mind with it's varying textures and umami flavors.
Print Recipe Rate Recipe

* There is one hour of idle time for this recipe.
* Okonomiyaki freezes well. Once cooled, wrap each in aluminum foil and place in a freezer bag. When you want to eat one, take it out, let it thaw and put it in the oven at 350 degrees until it reaches your preferred temperature.
Author: Killing Thyme 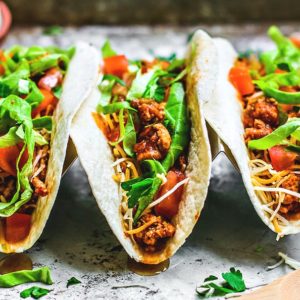