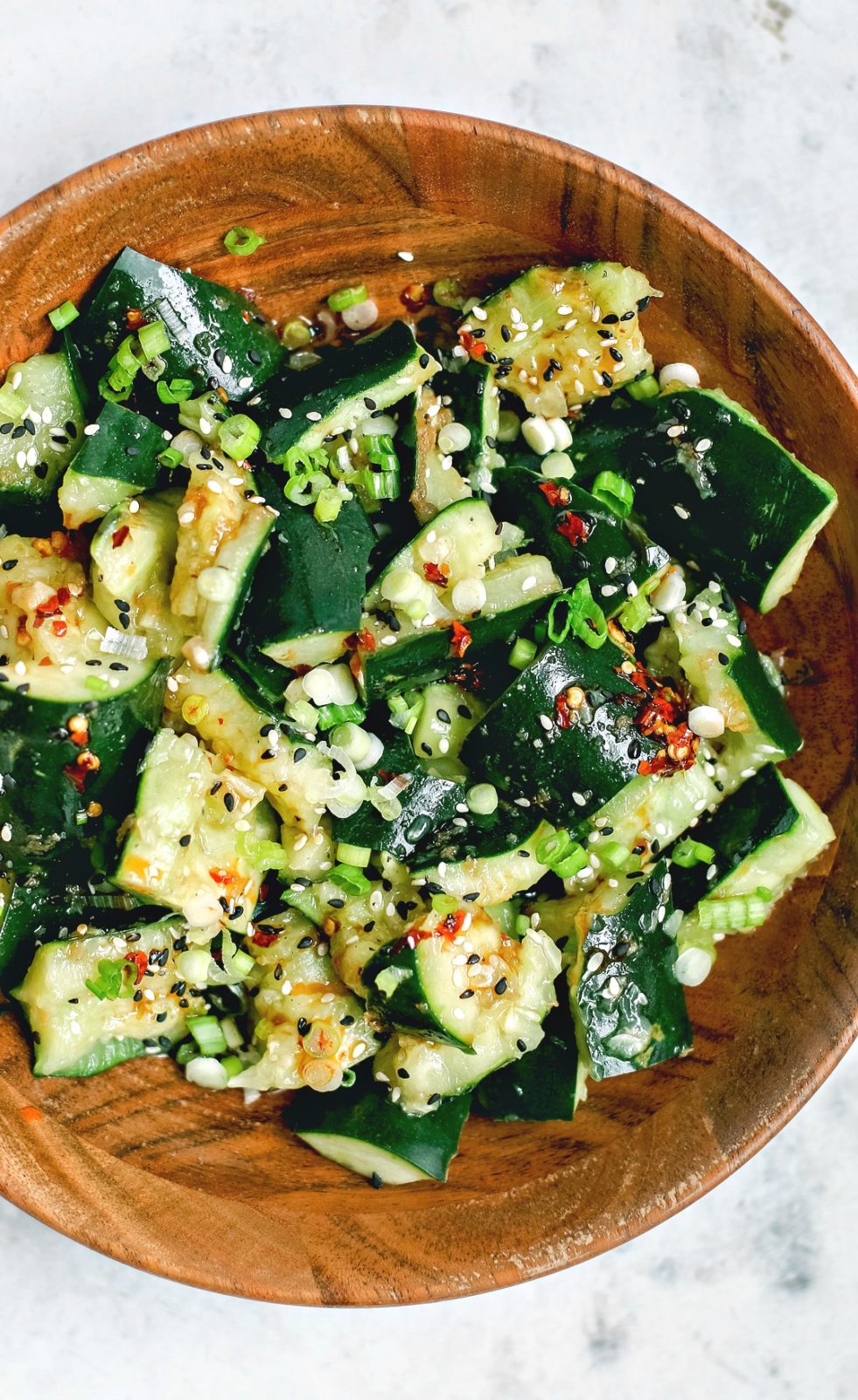 After being mostly absent in October, I’ve made it my mission to try and post two new recipes a week. I’m still playing catch up. But! I wanted to pop in really quickly and bring you this not-very-seasonal-but-still-totally-necessary recipe. Sichuan Smashed Cucumber Salad + Hot Chili Oil.

My introduction to this cool and crisp snack was recent, when my dude and I hit up Portland, ME. We had some time to kill before checking into our Airbnb, so we snuck into a dumpling house for a little nosh. After two flights in stuffy airplanes, the thought of a refreshing cucumber salad sounded so good.

And it was love at first bite. 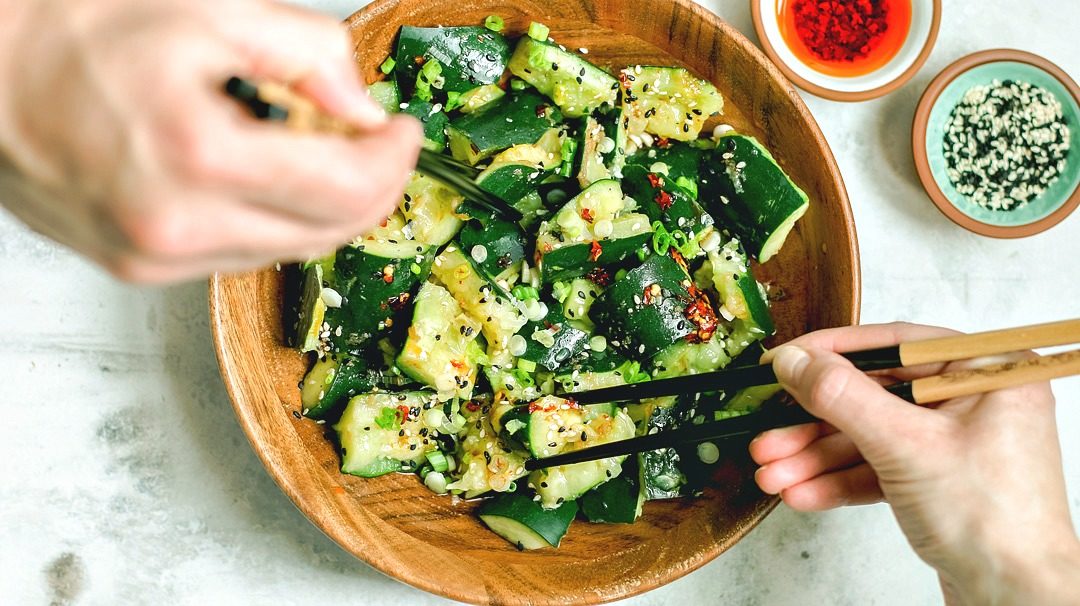 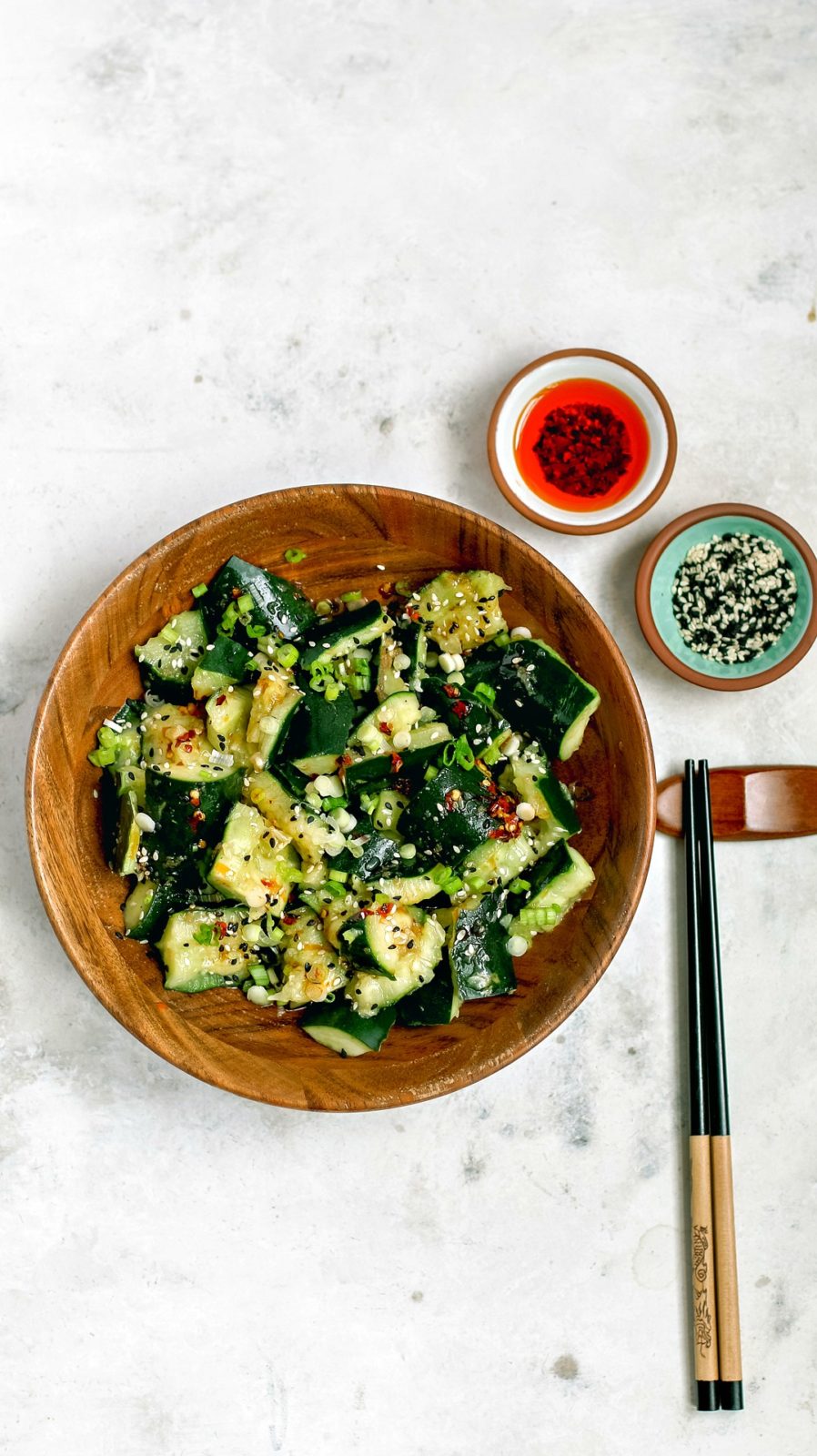 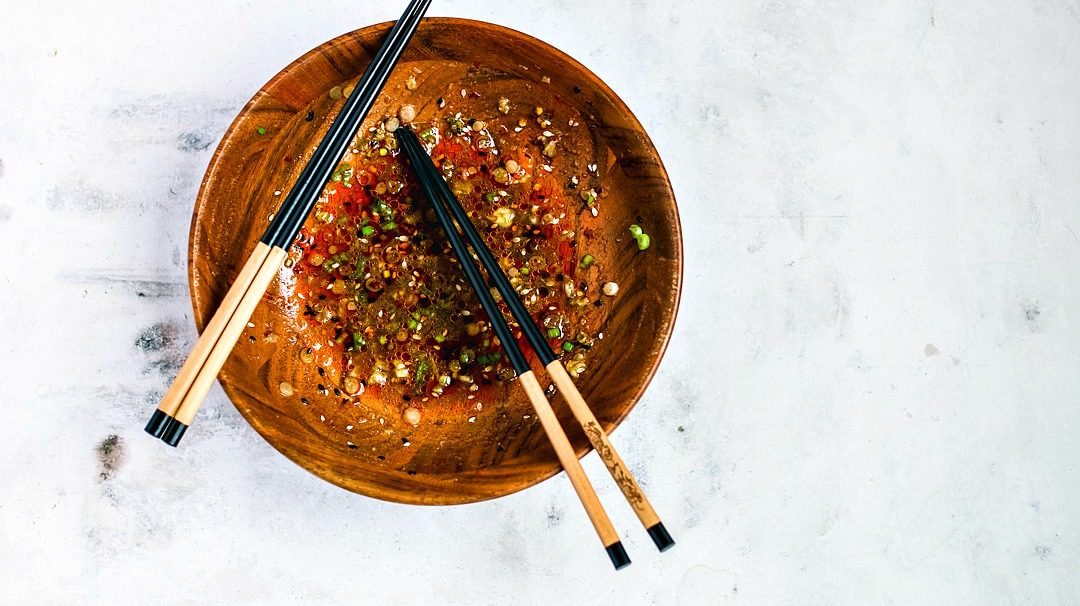 We devoured the entire bowl in minutes. Everything about it was perfect: the nuttiness from the sesame oil, the tanginess from the rice vinegar, the contrast of sweet and salty from the soy sauce, and the heat from the hot chili oil. My husband and I just looked at each other and, between crunches, agreed that we needed to make this at home. On the reg. 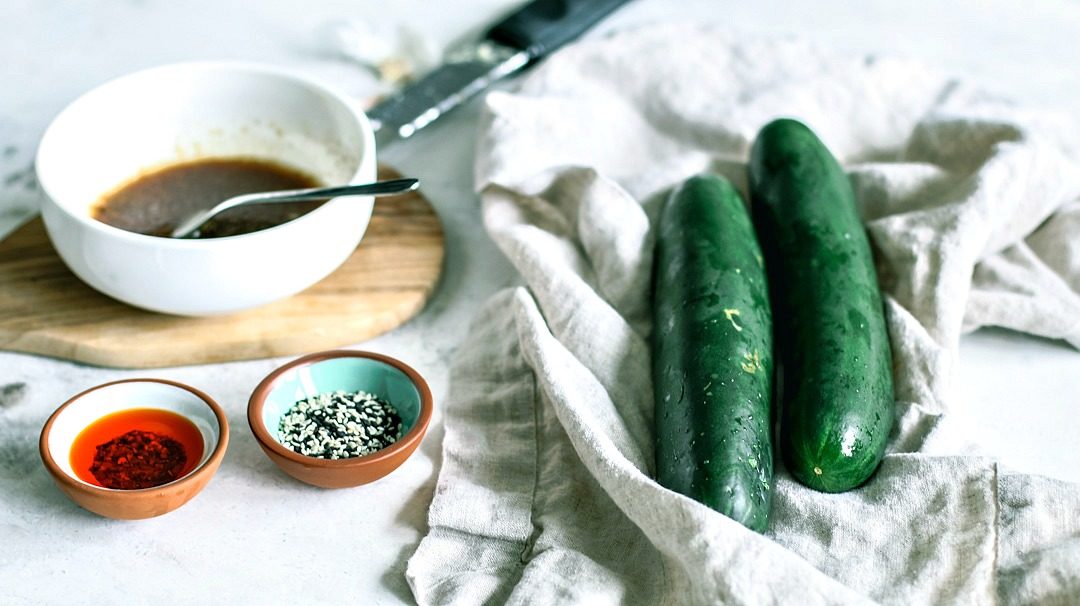 Sichuan cuisine is known for being pretty fiery. This cucumber salad acts as a cooling palate cleanser to nibble on between spicy bites—but it also works as a fab appetizer.

Here’s a random fact for you that might be helpful in some sort of trivia one day: one of the main ingredients, Sichuan peppercorn, was banned in the US from 1968 to 2005. Not because of its heat (which would actually make a better story), but because it was found to be capable of carrying citrus canker—a disease that affects citrus species. (Today you learned!)

These days you should be able to find legit Sichuan peppercorns at Asian markets without any issue. But! Instead of sending my tongue into a numbed and tingly frenzy, I decided to use hot chili oil instead; you could also use chili flakes. 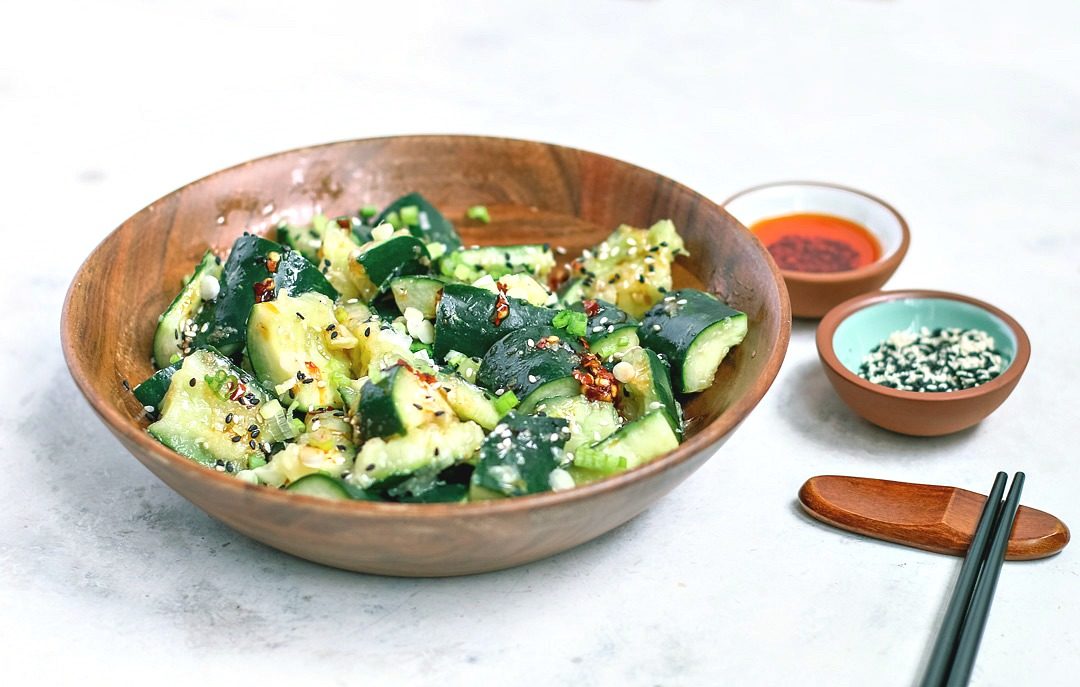 If you make this dish, snap a photo and tag me on the Insta @killing__thyme! I love seeing your creations, and you could be featured in my monthly newsletter <3 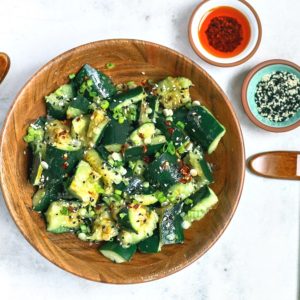 To toast sesame seeds, add them to a dry pan and place the pan over medium-low heat for about 3-5 minutes, or until they start to brown and become aromatic. Stir them a few times throughout the process to keep them from burning.
Author: Dana Sandonato
Course: Appetizer, Snack
Cuisine: Chinese, Sichuan 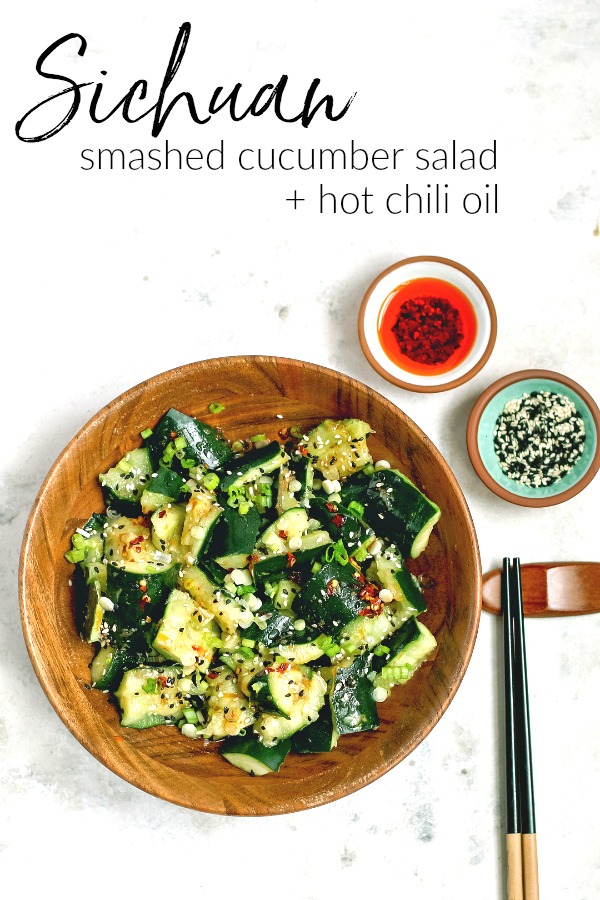