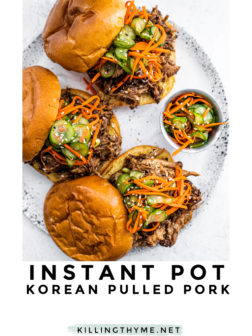 This Instant Pot Korean Pulled Pork brings pulled pork as you know it to a whole new level—and in just over an hour! 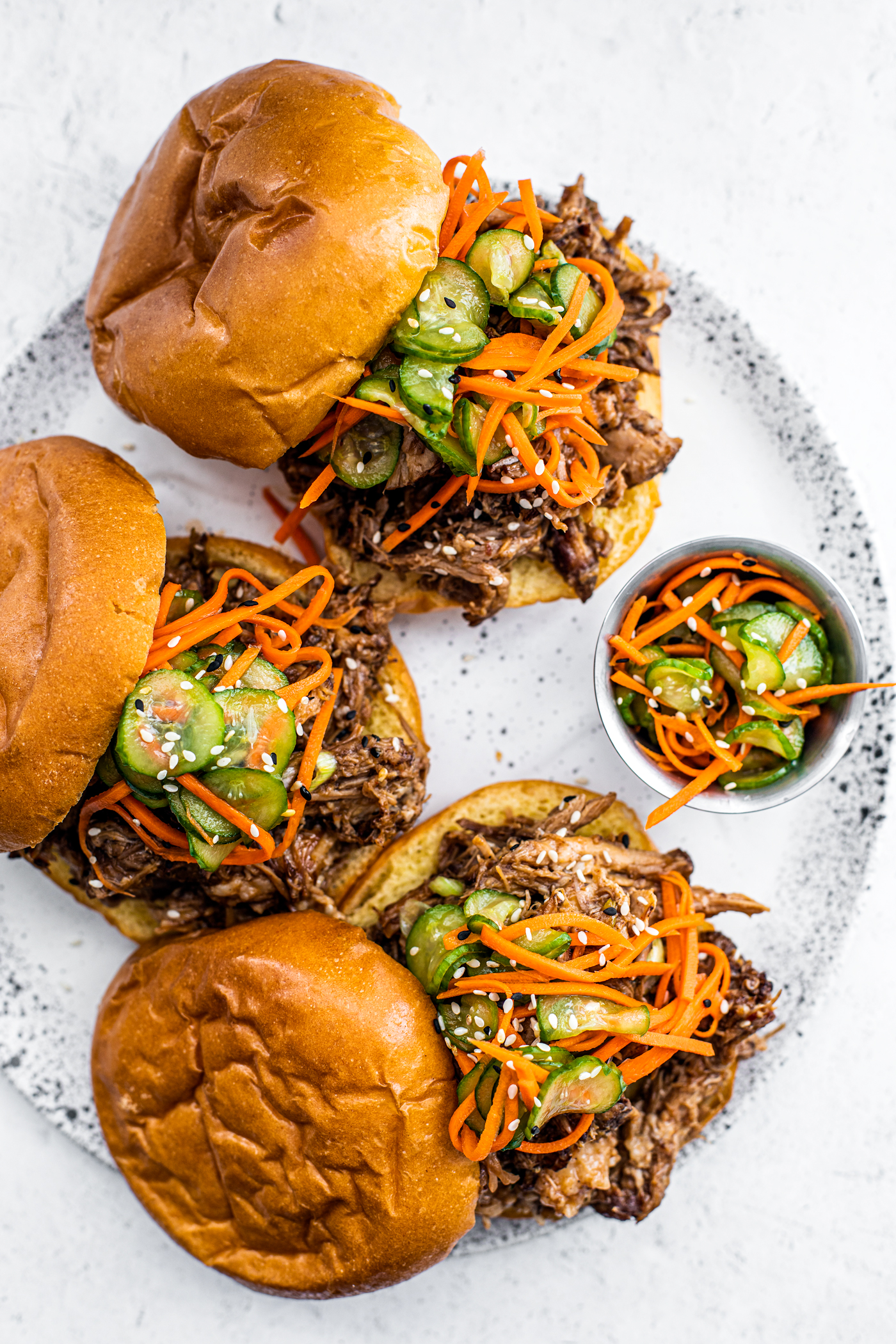 I’m just going to get to the point: the flavors in these pulled pork sandwiches are downright luscious. You get a bit of everything—sweet, salty, spicy, and sour. Korean cuisine has recently become one of my favorites and I can’t get enough of it, so I wanted to create something inspired by it. This recipe isn’t authentic Korean cuisine at all, let me be clear about that now. This is just an easy and approachable way to enjoy those coveted flavors at home until you can get your ass to the nearest and dearest Korean restaurant or H Mart food court.

I’m a huge fan of going into Asian markets, and if you live near one, I encourage you to get your ingredients there. However, if you don’t live near one, most of these ingredients should be accessible at your local grocer in the “International” aisle.

For the Korean-inspired sauce.

For that tangy slaw. 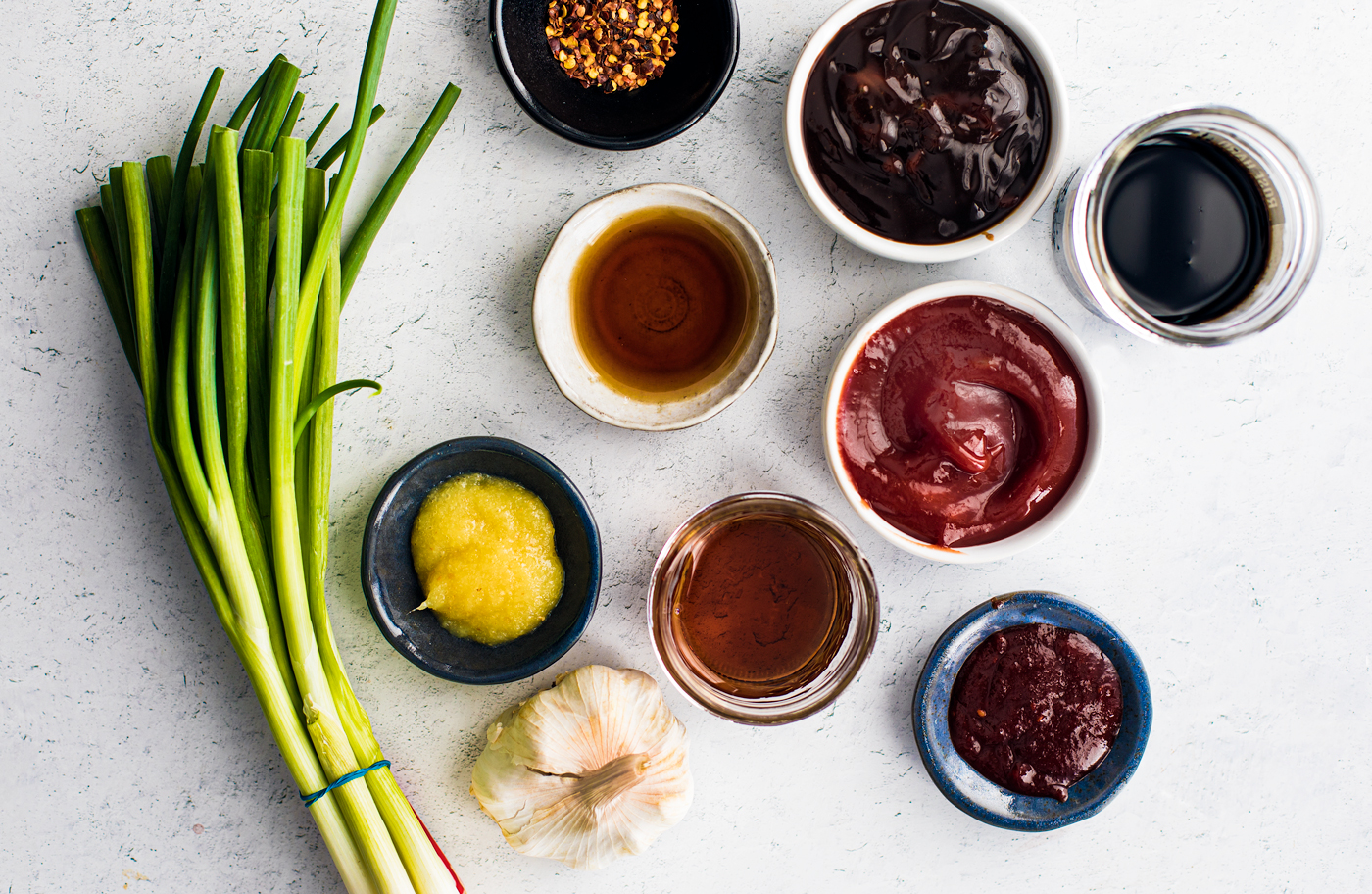 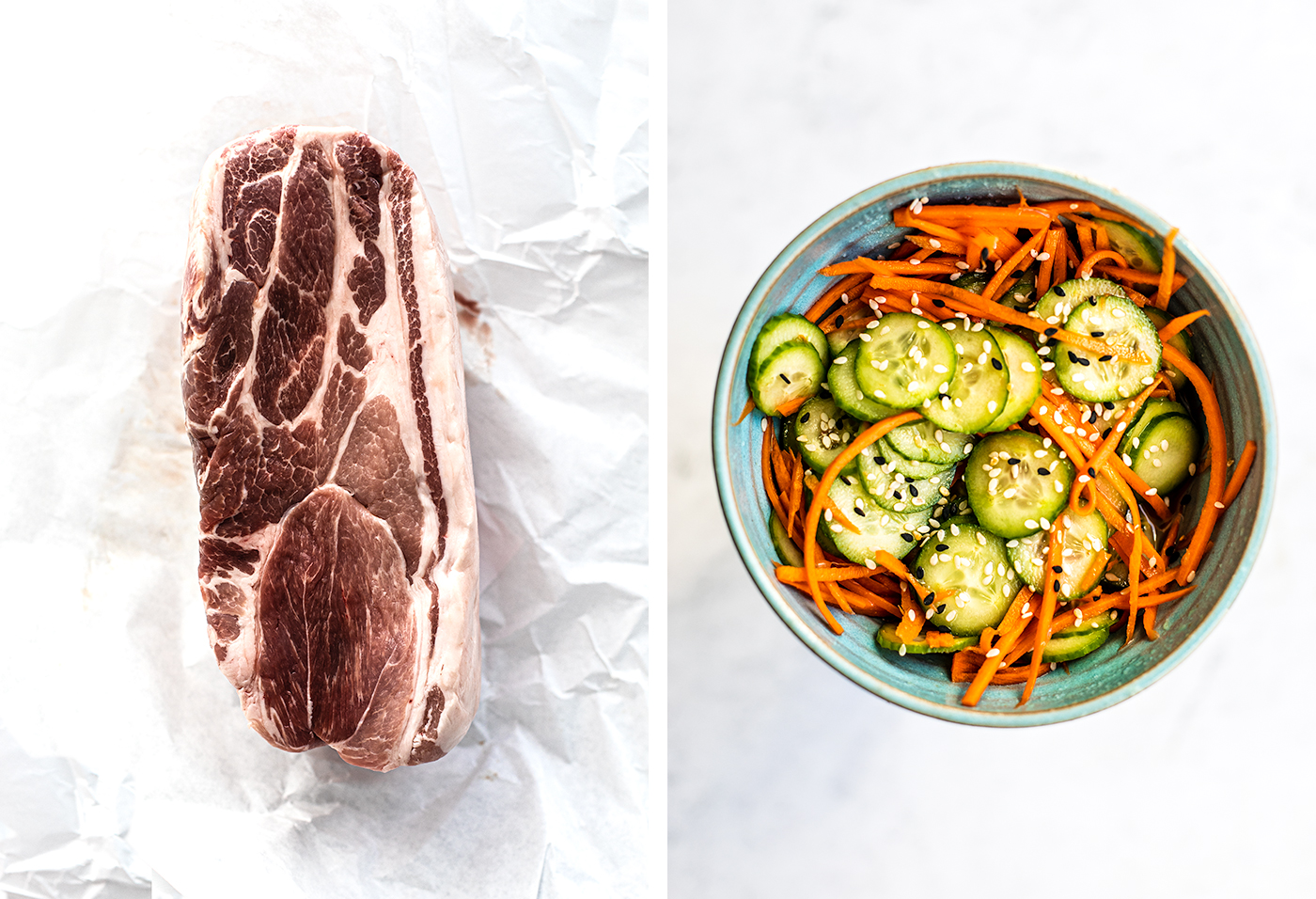 How to make pulled pork in an Instant Pot.

Backyard smoke pit pulled pork purists might be skeptical about a lightning-fast cooking method for a pork shoulder, but I’m promising you that this recipe yields melt-in-your-mouth pork, and in just over an hour. Here’s how to do it: 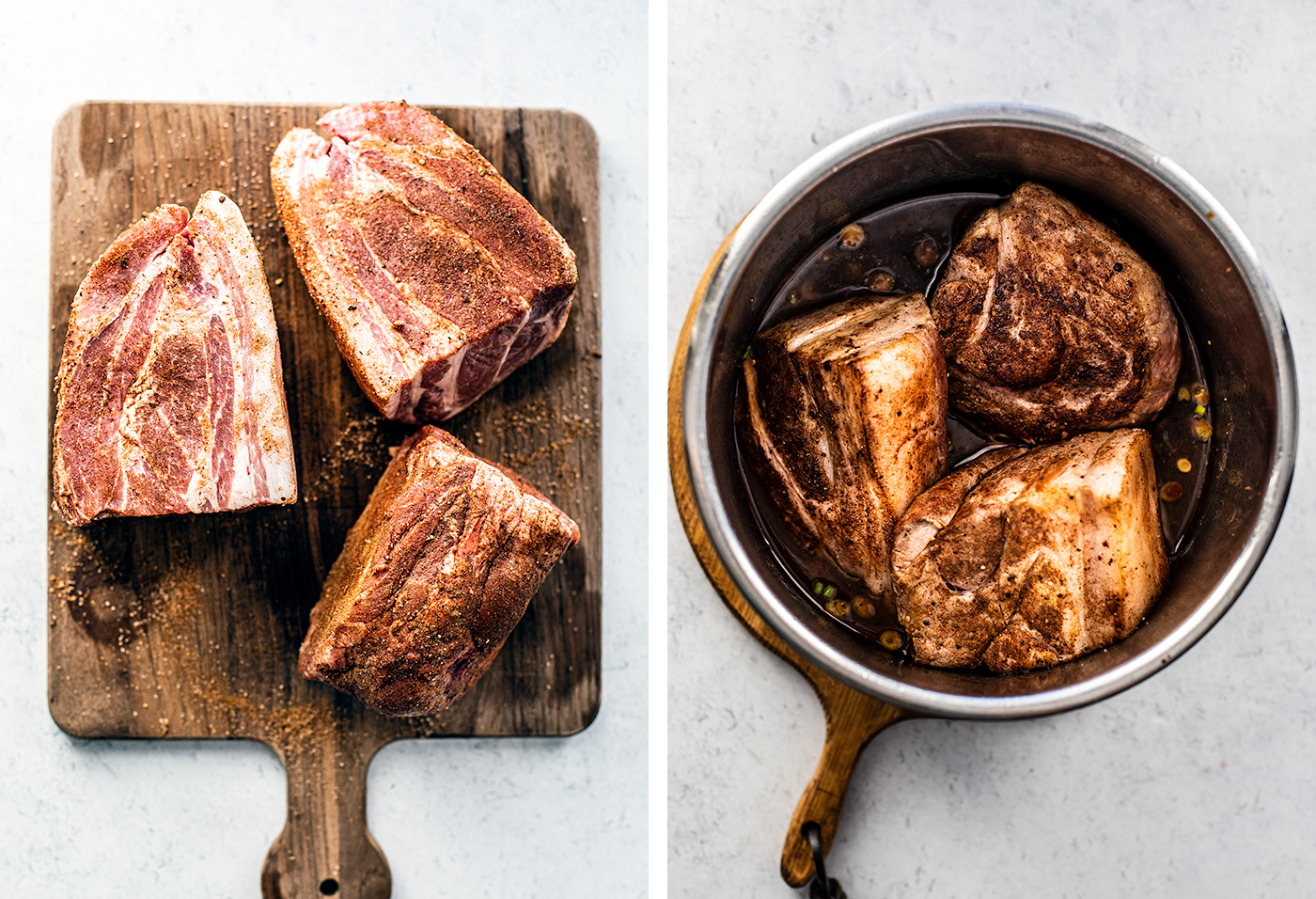 How much pulled pork per person?

Whether you’re entertaining or not, it’s good to know how much pulled pork you’ll need per person so that you have enough, or so that you don’t end up with too much. The BBQ pros out there suggest 1/3 lb per person—but keep in mind that they mean 1/3 lbs cooked. Cooked pulled pork will only weigh half of the raw pork shoulder because a lot of the moisture will evaporate during the cooking process. So, if you buy a pork shoulder that weighs 4-5 lbs like the one I’ve used here, you’ll end up with about 2-2.5 lbs of cooked pulled pork, which will feed 6-8 people, give or take. An easier way to remember all of this: 1 lb of pulled pork is typically enough to feed 3 people.

What cut of meat should I use for pulled pork?

There are two ideal cuts you’re looking for when planning for pulled pork: pork shoulder or pork butt, sometimes called Boston butt, which amazingly doesn’t come from the rear ;) Both cuts come from the shoulder of the pig. The butt is found above the shoulder blades, and the pork shoulder meat stretches down to the pig’s front hooves. The pork butt has more marbling and fat, which offers up more flavor, so that’s what’s I typically go for—and that’s what I’ve used in this recipe. It’s also worth noting that I’ve left the fat cap on the pork as it increases moisture and flavor during the cooking process.

When you’re smoking your pork or cooking it in the slow cooker, this is entirely up to you. But for this recipe, you’ll want boneless so that you can get even cuts to fit in your Instant Pot. 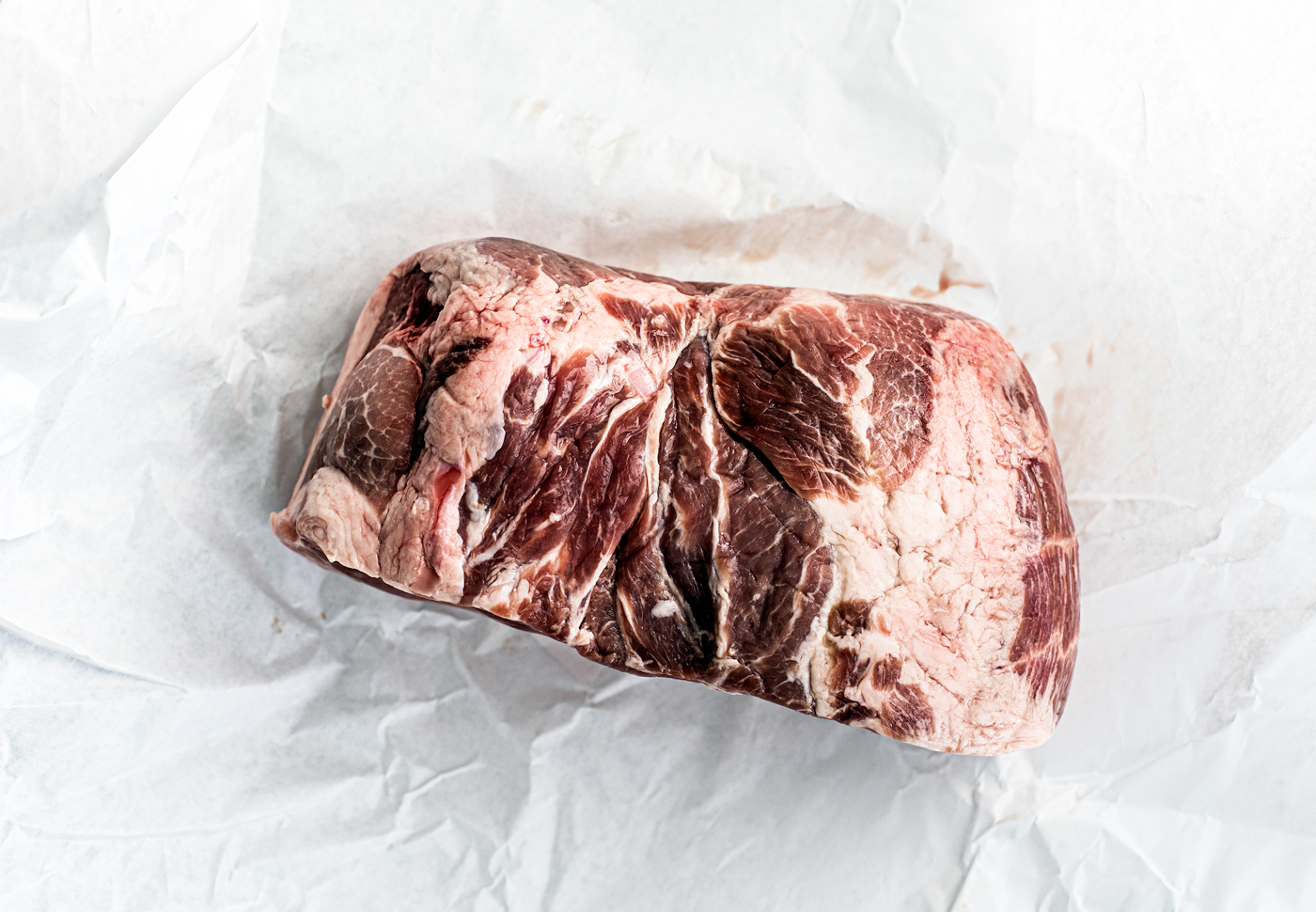 What to do with leftover pulled pork.

Leftover pulled pork is great, because it reheats well and doesn’t lose its moisture so you can enjoy a tender pulled pork sandwich for a few days! Pulled pork is also great in lettuce wraps, tacos, or omelettes. You could also get super creative and indulgent and throw some into a mac and cheese. 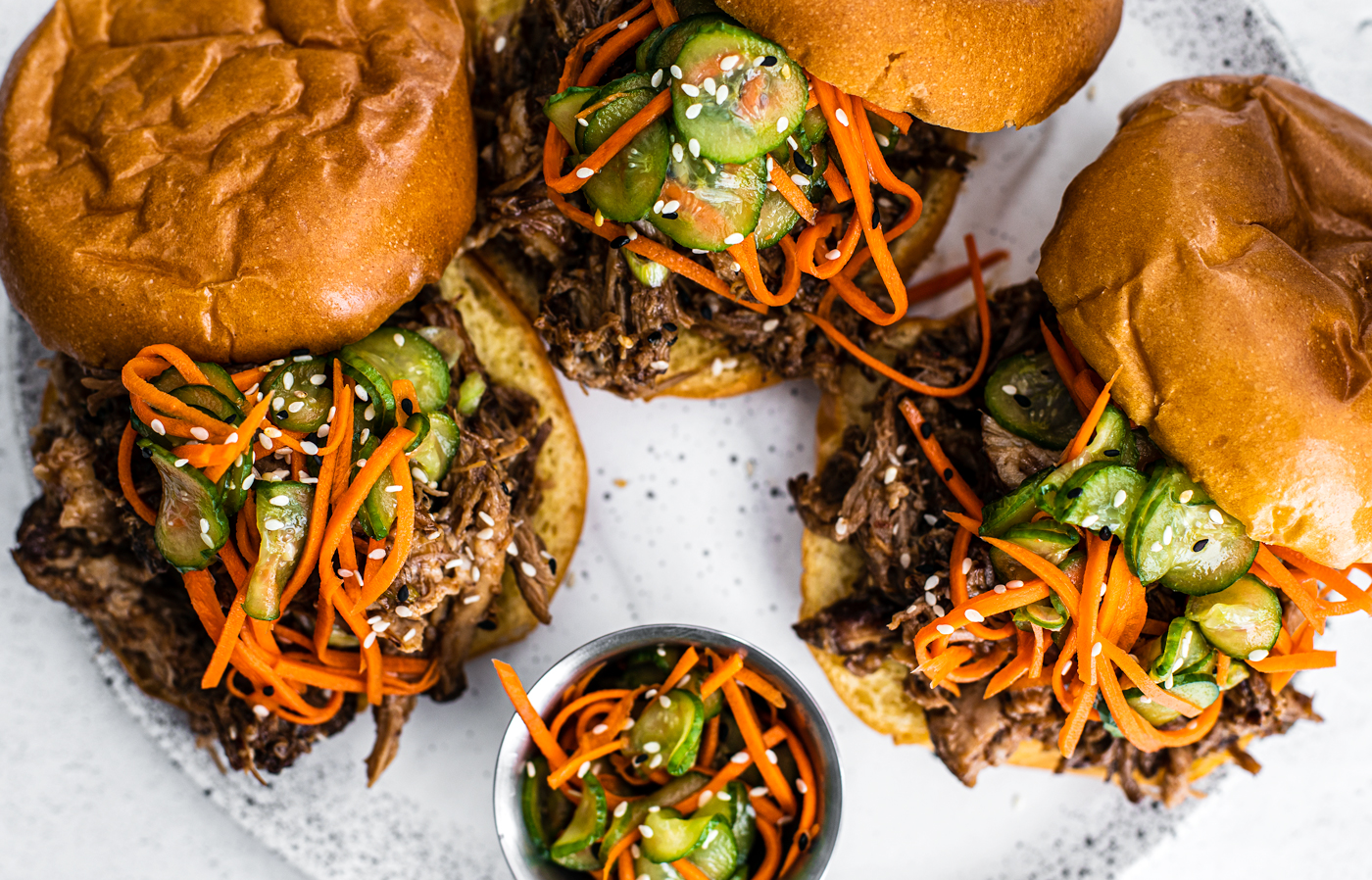 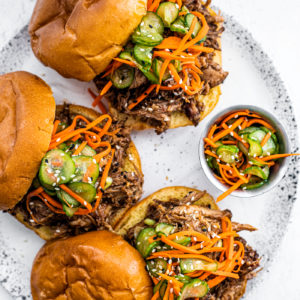 For the Korean-inspired sauce.