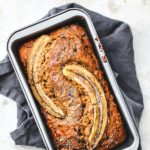 This Walnut Chocolate Chip Banana Bread With Sour Cream is rich, dense, moist, and offers up crunch and sweetness in every single bite. 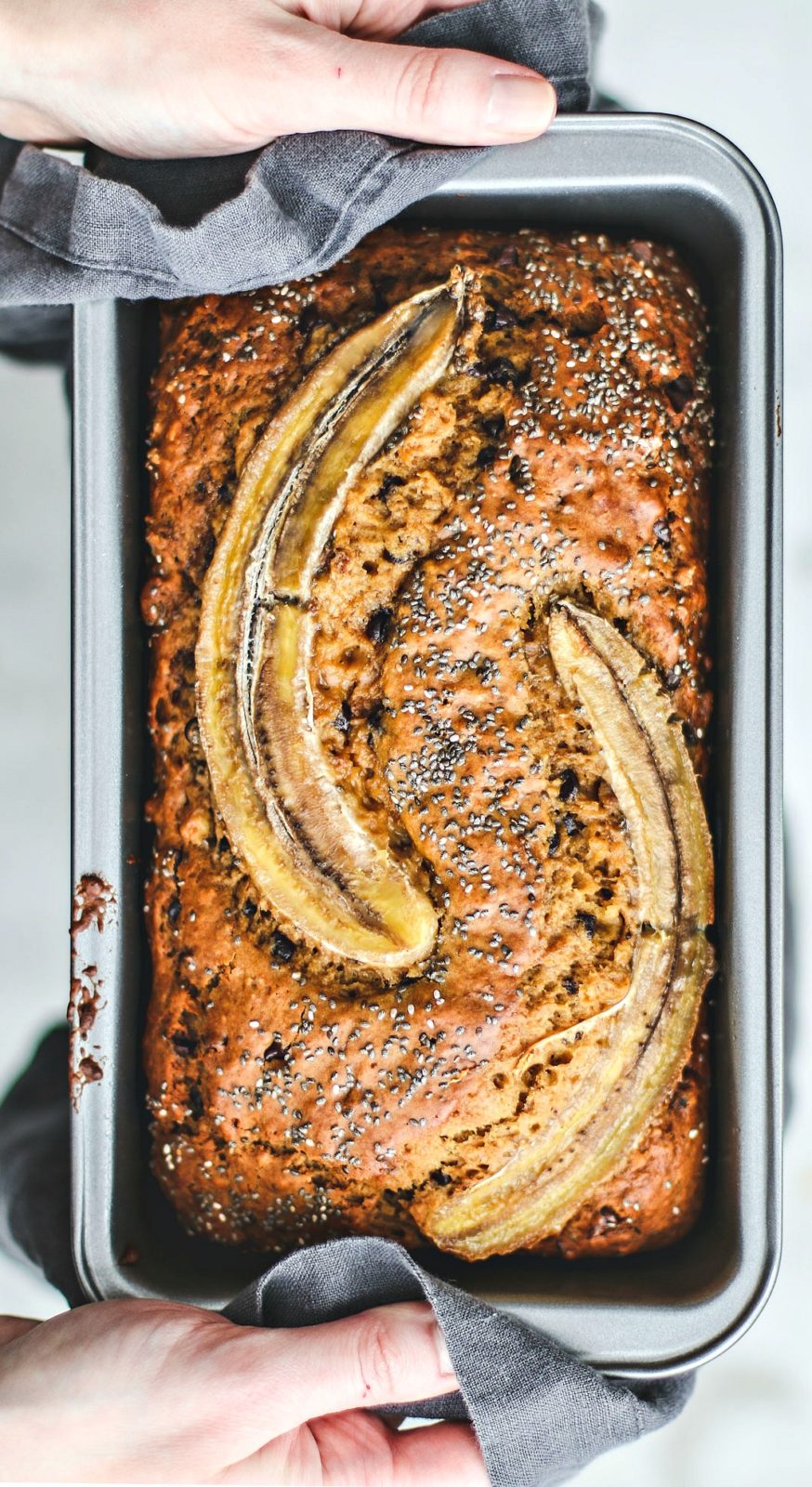 I had an epic baking fail last week, but I’m not even mad about it. Had that recipe worked out, I wouldn’t have been strapped for a plan b and I wouldn’t have come up with this rustic beauty.

Recipe testing savory dishes is always a cinch in this house, but when it comes to baking, it’s pretty hit or miss. Though when you *do* see me posting a sweet treat, you can rest assured that it’s a slammin’ success. This Walnut Chocolate Chip Banana Bread With Sour Cream will confirm that. You’ll want it for breakfast, an afternoon snack, and for post-dinner dessert. It won’t last long :) 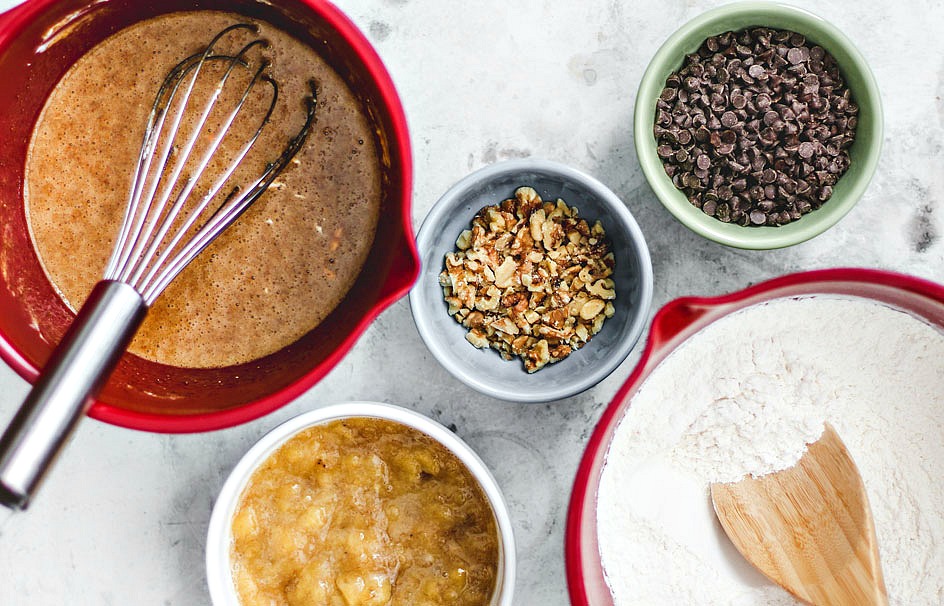 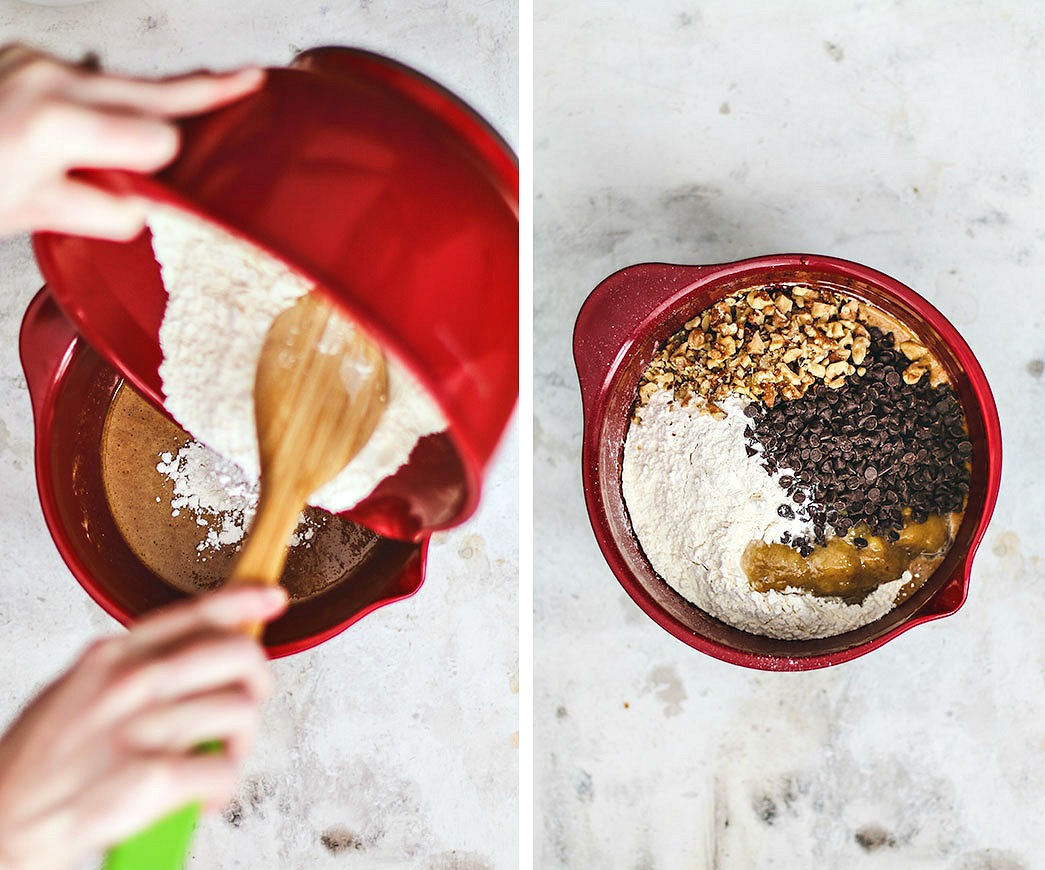 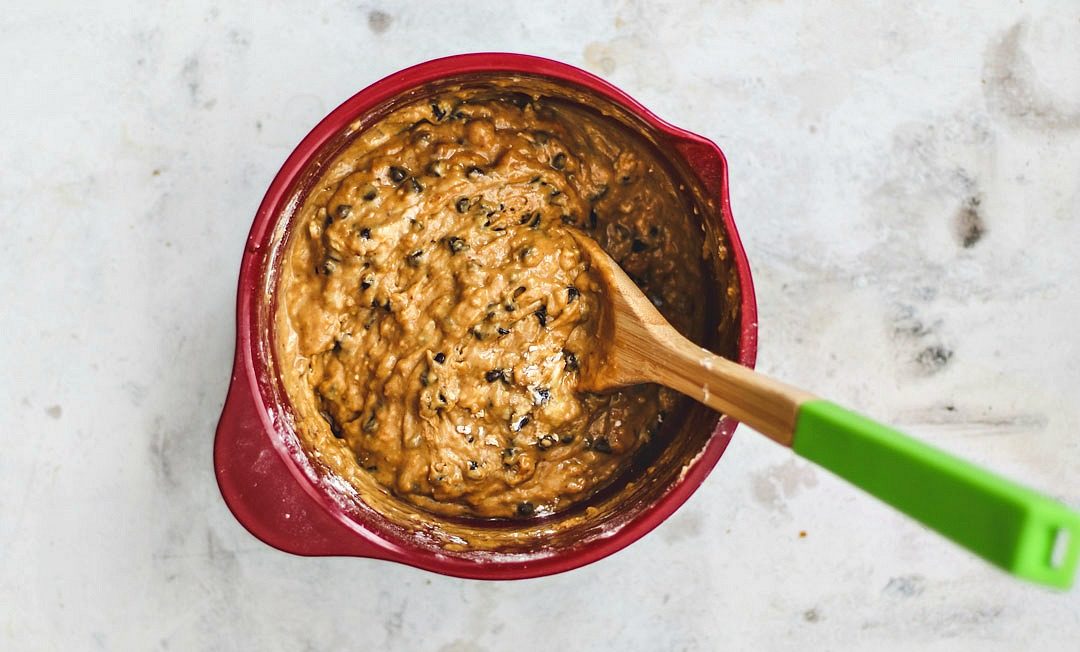 When we moved into our new house back in October, I decided that the pound of frozen dark brown bananas in the freezer was coming with us—much to my husband’s chagrin, lol. But! I hate food waste. And who in their right mind gets tired of banana bread? I just had to finally get my ass in gear and make banana bread. Here we are, almost five months later.

So. Sour cream. Have you ever baked with it? It’s pretty awesome. It leaves you with a richer, denser texture, yet it still melts in your mouth. It also brings on subtle notes of acidity. That might sound wacky since we’re talking about cake here, but with the nuttiness of the walnuts and the sweetness of the chocolate chips, it works. You can swap the sour cream for plain whole milk Greek yogurt, but you may get a tangier flavor as a result. (I haven’t tried it yet. If you do, let me know in the comments!) However, I wouldn’t sub in regular ol’ plain yogurt; it’s not as thick and it contains too much liquid, which is what caused last week’s previously mentioned baking fail.

At the research and planning stages of this banana bread, I couldn’t decide between adding walnuts or chocolate chips. I typically go for the former because I love getting that crunch, but who doesn’t love a little chocolatey goodness? Unable to make a decision, I decided I’d just use both. The top of the bread is adorned with a halved banana and chia seeds for some extra nutrition. Both are totally optional—but those banana halves add some delicious gooeyness that you might not want to miss out on. You could also slice the banana into rounds and place them all over the top. I’m just in love with how those halves look! 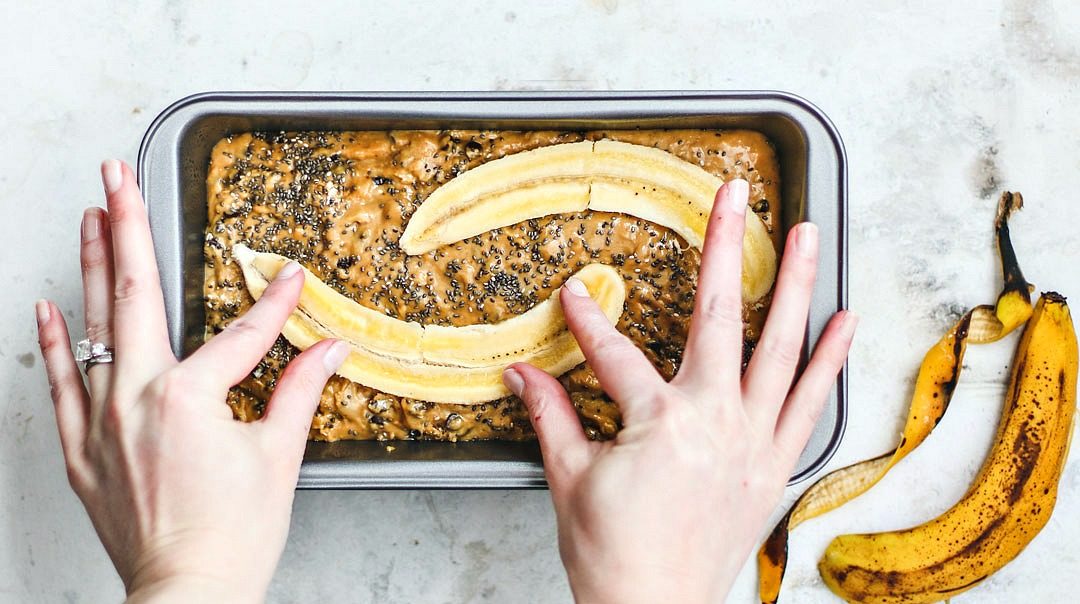 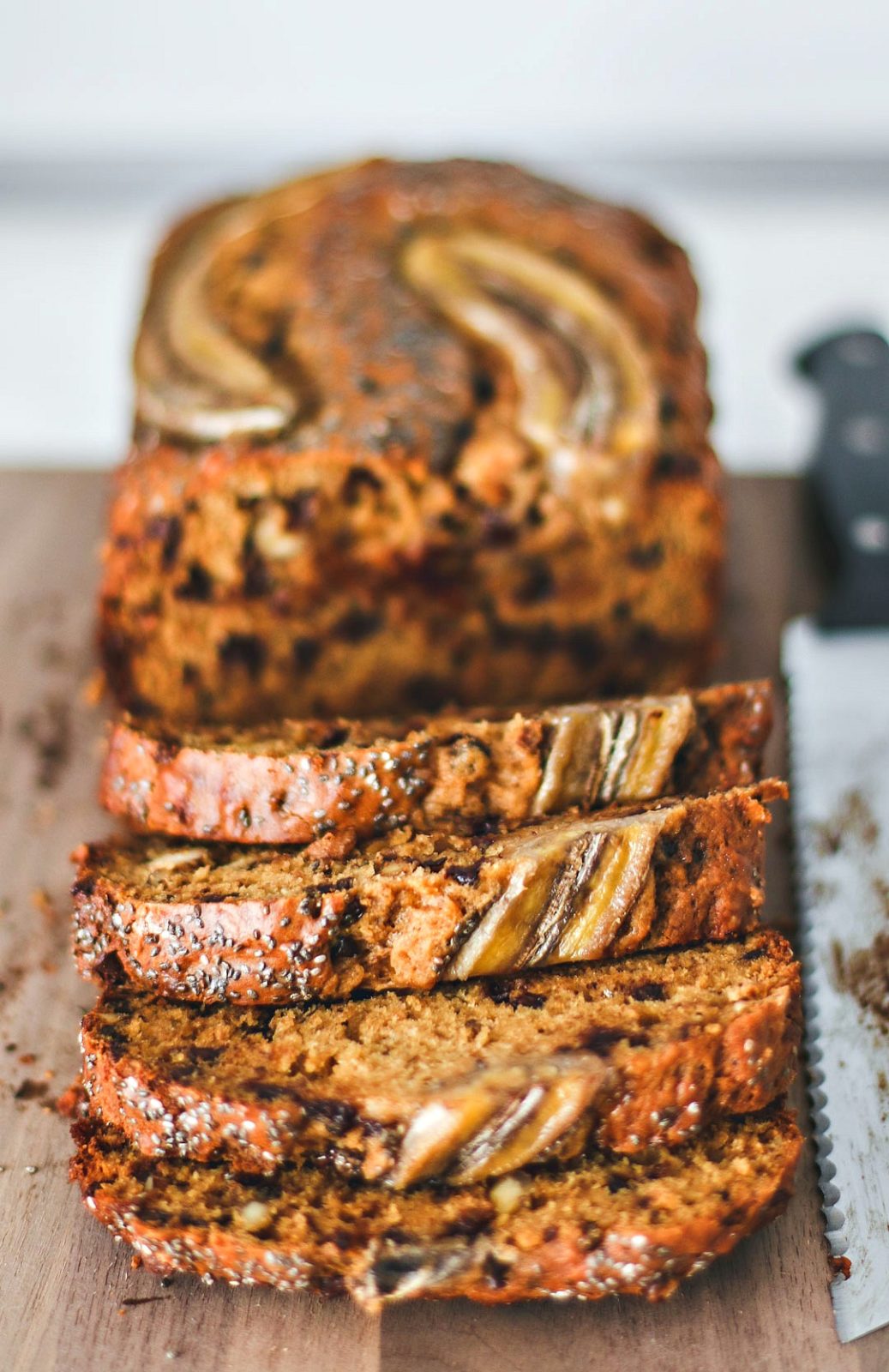 Here are some other crave-worthy breads and muffins… 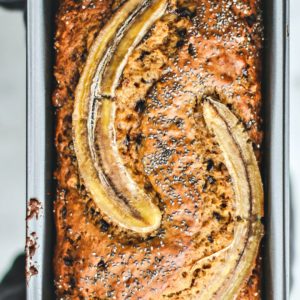 You can swap the sour cream for plain whole milk Greek yogurt, though you may get a tangier flavor as a result. (I haven't tried it yet. If you do, let me know in the comments!) However, I wouldn't sub in regular ol' plain yogurt; it's not as thick and it contains too much liquid, which is what caused last week's previously mentioned baking fail.
Author: Dana Sandonato
Course: Breakfast, Brunch, Dessert 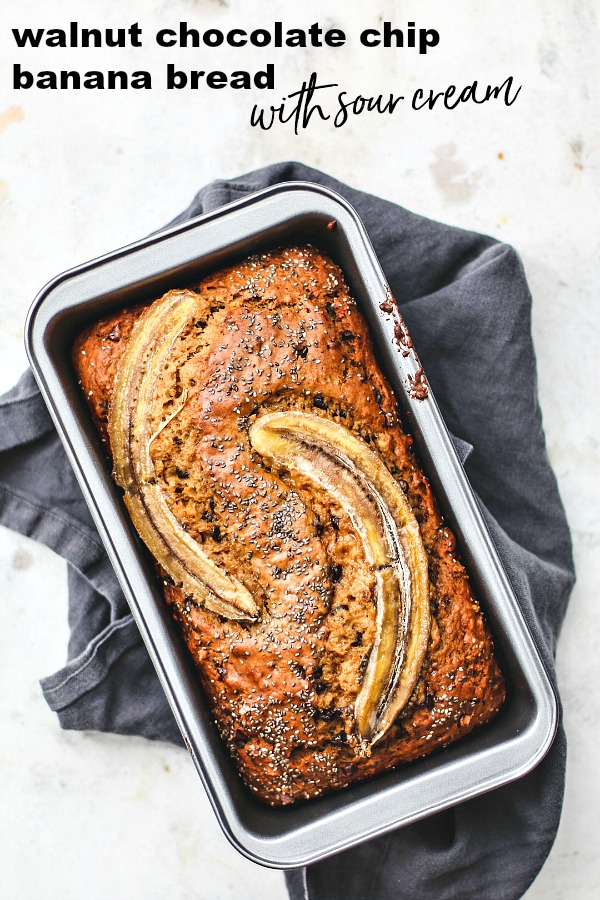