I wanted to kick this series off with ramen because a) it’s something most folks are familiar with and b) I’m kind of obsessed with it. Honest to blog, I can’t control myself around big bowls of ramen with their silky soft-boiled eggs, playful narutomaki and crisp fresh veggies.

In David Chang’s book Momofuku, he admits that, despite his love for ramen, the sanctimony surrounding it is a bit much. The movie Tampopo did a fabulous job at boosting ramen’s profile and creating some major glamour around it but, at the end of the day,  “…it’s soup with noodles in it, topped with stuff.”

Growing up as a North American white kid in an extremely beige town, ramen was nothing more than an instant soup and, when feeling creative, a brilliant addition to a bum stir-fry. But as much as we love to jest about our favorite cash-strapped hangover noodles, it was the invention of these instant noodles in 1958 by Momofuku Ando that introduced the world to ramen and shot it up to stardom. By the 80s, every single ramen shop in Japan had it’s own unique twist — much like how different parts of the Southern US have their distinctive barbecue styles and how certain major cities have their own ways with pizza. And though ramen is now dubbed a Japanese dish, it originated in China with lo mein being its forerunner.

It pains me to admit this, but the first time I indulged in a true bowl of ramen from an actual Japanese restaurant was just last year, in 2015, when I moved to Raleigh, NC. Prior to that, living back at home in Canada, I was too engrossed by my pho obsession to drive out of my hometown in search of a legit ramen joint. Luckily I’m surrounded by options here in Raleigh. I only have to drive for about 10 minutes for an opportunity to slurp away at ramen, pho, kake soba — you name it. I don’t mean to gloat but… it’s kind of the best.

As if that wasn’t awesome enough, there’s also a Korean market nearby where I can grab anything I need to make all of this good stuff from scratch in the comfort of my own kitchen. There is something super satisfying about going into an Asian market, exploring new ingredients, learning about a different culture and supporting a family-run business all in the process. Seriously — if you’re cooking food from another culture, any other culture, forgo the “International” aisle at your local supermarket. There are so many families who moved here with nothing and opened up markets to establish themselves and have a better life. These are the people you want to support; these markets will offer you the real deal when it comes to knowledge and ingredients. These people appreciate your business. 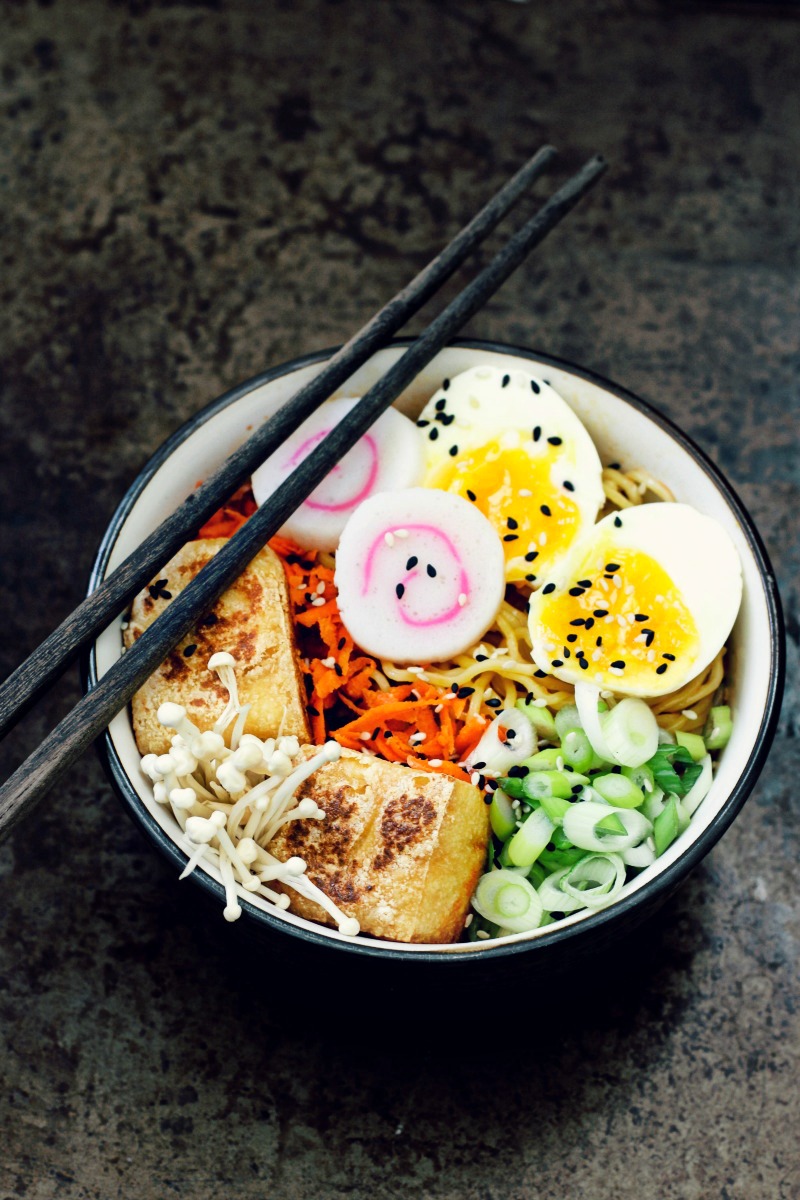 Despite the fact that ramen is incredibly flavorsome, the broth is simple and calls for minimal ingredients. Some variations are made with bones while others are made with dashi — a consommé. I’m going to focus on dashi in this series since it’s pescetarian-friendly and can be vegetarian friendly.

Dashi is made with kombu (kelp), katsuobushi/bonito flakes (dried + smoked flaked skipjack tuna), iriko or niboshi (sardines), or a combination of all or two of them. With a good dashi, you really don’t need much seasoning in your dish; the dashi gives you a nice layer of umami to build upon.

When making ramen or soba noodle soups, my go-to stock is an awase dashi, which is a combination of kombu + katsuobushi. This is a great base for a pescetarian, but if you’re vegetarian, stick with a simple kombu dashi or shiitake dashi.

You can buy an already prepared dashi if making it from scratch doesn’t interest you — but I’d highly recommend whipping up your own sometime. It’s super easy, and homemade is always better.

It’s the appearance of the ramen bowl that reels people in. Soup just seems like soup until you deck your bowl out with a perfectly soft-boiled egg, fried tofu, enoki mushrooms, scallions, bok choy, bamboo shoots, cuts of meat, narutomaki… the list goes on. And it isn’t *just* the bright and vivid colors of the swoon-worthy toppings that draw us in; it’s also the visual of something that is substantial and nourishing. When I look at a big gorgeous bowl of ramen, I know my hunger will be sated; I know it will make my belly happy and it will warm the cockles of my heart.

When planning for your ramen bowl, be creative and adorn the dish with whatever you want. There are few rules here, if any. My go-to is the soft-boiled egg, shredded carrot, narutomaki, a generous helping of sliced scallions and sesame seeds. Sometimes I add to that with varying mushrooms, etc., but that is generally my “perfect bowl” —  plus a dollop of sambal oelek for extra heat. 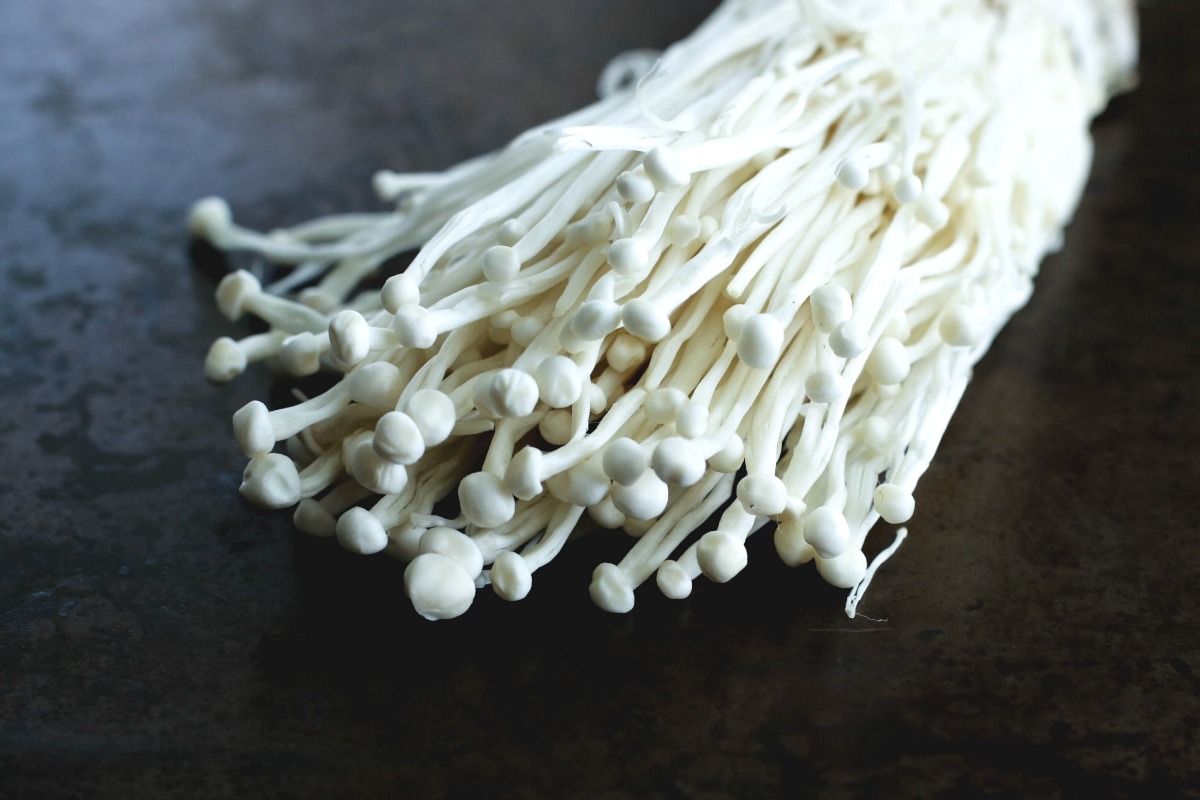 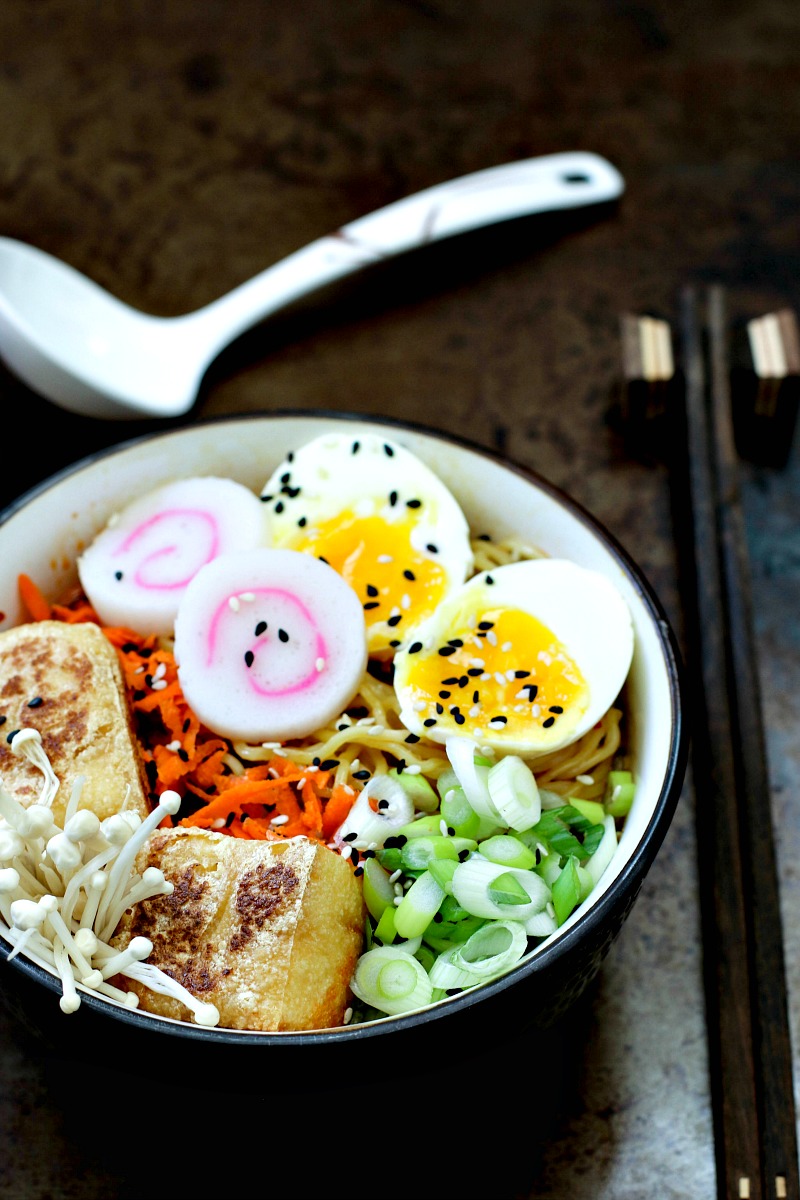 I wanted to share a Spicy Shoyu Ramen recipe with y’all simply because it’s my favest of the faves. It’s also the oldest variation of the five most common variations (Shio, Miso, Tonkotsu + Curry) so, I guess we can consider it a pioneer of sorts. Shoyu ramen has a clear broth, albeit dark, and is most commonly based on a vegetable or chicken stock. The addition of soy sauce brings us to this salty, tangy and savory broth. The addition of chili bean paste gives it an awesome sinus-clearing kick that is perfect for a chilly day and an amazing way to kick a cold. (Seriously, move over chicken soup.)

Prep Time: 10 mins
Cook Time: 20 mins
Total Time: 30 mins
This swoon-worthy Spicy Shoyu Ramen is super easy to make in the comfort of your own home! This is the first installment in my East series.
Print Recipe Rate Recipe

Garnishes (optional + not measured as you can add as much or as little as you'd like):

Make your own dashi…